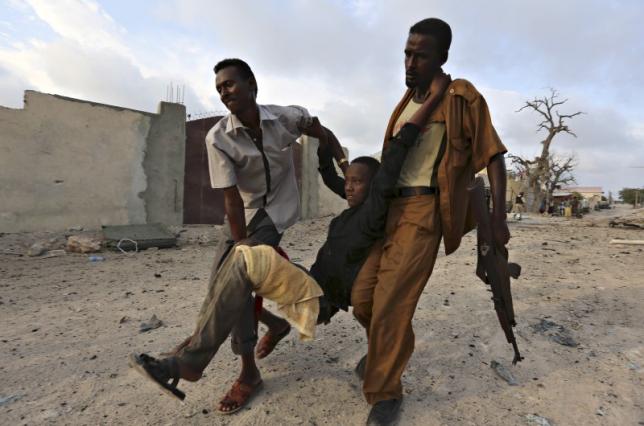 MOGADISHU - A hotel siege by al Shabaab militants in the Somali capital has ended and the final death toll from the attack stands at 14, a senior government official said on Saturday. Al Shabaab fighters blasted and shot their way into the popular Hotel Maka Al Mukaram on Friday afternoon, trapping many government officials. Security personnel, led by a unit from the elite U.S.-trained special forces troops known as "Gaashaan" (Shield) stormed the hotel on Friday evening and fought the attackers into Saturday. Mohamed Abdi, information minister, said the 14 dead included Somalia's ambassador to Geneva, five civilians, four hotel guards and four government soldiers. Four attackers, including one who detonated a car bomb, were also killed. "The hotel operation is over and these are the dead bodies of the militants who wanted to slaughter our people. Thanks to our forces who saved our people in the hotel," he said at the scene while displaying the militants' bodies to reporters. Police had previously put the number of dead at 15, and 20 wounded. African peacekeeping forces pushed al Qaeda-linked al Shabaab out of Mogadishu in 2011, but it has kept up guerrilla-style attacks, looking to overthrow the government and impose its strict version of Sharia, or Islamic law, on the country. The AU Mission in Somalia condemned the attack, including the killing of Somalia's representative to the United Nations Office in Geneva, Yusuf Bari-Bari. "Our message to the perpetrators of this inhuman act is that their action will not dampen our spirit for the common good of Somalia," it said in a statement. Sheikh Ali Mahamud Rage, al Shabaab's spokesman, said in an emailed statement that fighters who had survived the attack had left the hotel, and he threatened more violence. He did not say how many people had been involved in the attack. Abdiasis Abu Musab, al Shabaab's military operations spokesman, said they had targeted only government officials and had spared civilians. Earlier on Saturday journalists and paramedics had been barred from entering the hotel grounds and had only been allowed to watch from its gate. Streets surrounding the hotel were sealed off by government and African Union peacekeeping troops. An offensive launched last year by AU forces along with the Somali army has driven al Shabaab from its strongholds in central and southern Somalia, while a series of US drone strikes have killed some of its top leaders. In February, al Shabaab fighters attacked another hotel in Mogadishu, killing at least 25. –Reuters