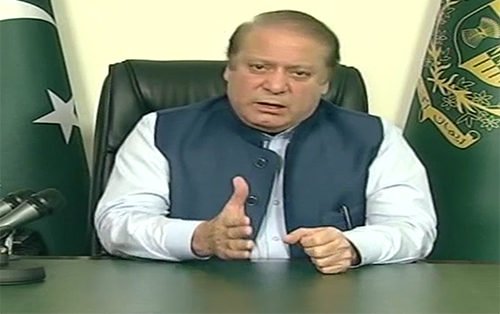 ISLAMABAD (92 News) – Prime Minister Nawaz Sharif has announced to establish a high-level judicial commission comprising of retired judges of the Supreme Court to probe the Panama Leaks. In a television address to the nation on Tuesday, he said that he was first time talking about his self during his political life. He said that some people were targeting him and his family for their political objectives. The prime minister said that the allegations leveled during the last 25 years were being repeated. “Before the inception of Pakistan, my father started his business whose another branch was in Dhaka which destroyed during the Fall of Dhaka. Later, Zulfikar Ali Bhutto occupied his Ittefaq Foundry in Lahore and as a result, his all-life savings wiped out in a moment,” he said. The prime minister said that his father had established six more institutions with a new resolve. “In 1989, our raw material was not allowed to be unloaded from a ship, causing us a loss of 500 million. In the second tenure of the PPP, we had to bear the loss in the business,” he added. Nawaz Sharif said that their ancestral house in Model Town was also snatched. “During our exile, my father established a factory in Makkah and Saudi banks provided the loan for the factory in Saudi Arabia. Later, it was sold out.” He said that Hassan Nawaz had been in London since 1994, while Hussain Nawaz had been living in Saudi Arabia since 2000. “My both sons are running their businesses as per the laws of these countries.” The prime minister said that his family had returned each penny of the loans amounting to Rs 5.75 billion, while did not get a single rupee waived. He said that he had neither misappropriated the national exchequer nor used it for personal use.