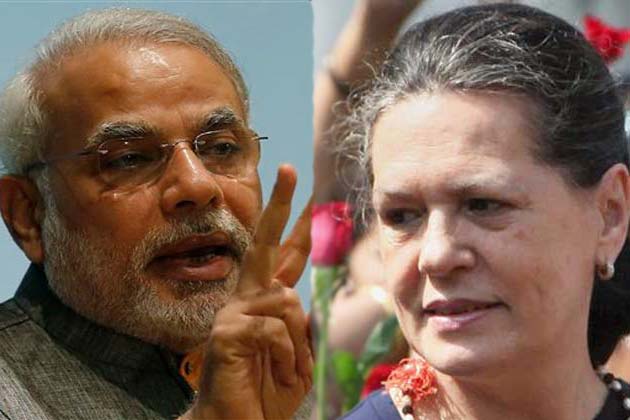 NEW DELHI - President of India's opposition Congress Party, Sonia Gandhi, on Thursday attacked Prime Minister Narendra Modi for announcing historic peace deal with militant separatists of northeast without taking the opposition into confidence. She said the peace agreement might be historic but the Prime Minister did not even consult the chief ministers of the states that are directly affected. "Well, the Naga peace accord, we are actually shocked that the prime minister should not even think of taking into confidence our chief ministers, our Manipur Chief Minister, Assam Chief Minister, Arunachal Chief Minister who are directly affected. Here is another show of the arrogance of this government. How can you sign an accord? I have no doubt that perhaps it may be historic but what about consulting the chief minister of the state who are directly affected?" said Gandhi in New Delhi. However, after signing the accord Modi had called up opposition leaders including Gandhi and his predecessor Manmohan Singh to inform them of the deal. India signed a peace agreement on Monday (August 03) with a leading tribal separatist group in the country's northeast that had waged guerrilla war for six decades against central rule from New Delhi. Officials from Modi's government signed the accord with the National Socialist Council of Nagaland (NSCN-IM), one of several separatist groups active in the remote and underdeveloped northeastern region bordering on China, Myanmar, Bangladesh and Bhutan. The NSCN-IM has been fighting for an independent ethnic Naga homeland uniting parts of the mountainous northeast with areas of neighbouring Myanmar, where it runs a government-in-exile. At least one other Naga faction remains at war with New Delhi. New Delhi and the NSCN-IM have been in talks since 1997. The terms of the agreement were not immediately known. Modi's government has said it wants to develop the region, which has long felt neglected by the rest of the country, by pumping in development funds and building better infrastructure. Militants in the northeast have stepped up attacks against India's armed forces this year. Guerrillas killed 20 soldiers in Manipur, which borders Nagaland, in June in the deadliest attack on security forces in the area in two decades. The unrest has killed more than 170 people, most of them militants, in the northeast this year, according to the South Asia Terrorism Portal. Last year, 465 people were killed. Militant violence is declining across India, but the country is still fighting separatists in disputed Kashmir state and in the northeast, as well as Maoist-inspired groups operating across a swathe of the east. -Reuters