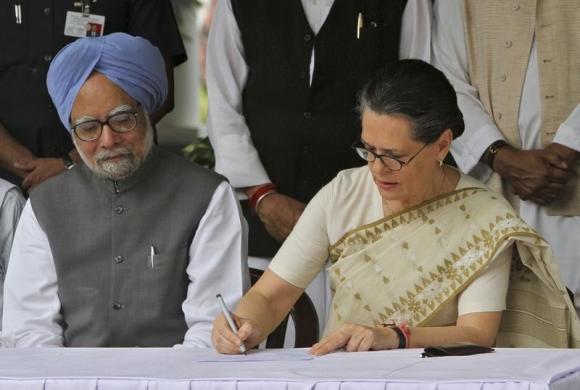 NEW DELHI - The top leadership of India's Congress party including its enigmatic president Sonia Gandhi walked to former Prime Minister Manmohan Singh's home on Thursday in a unusual display of support after he was summoned to court in a corruption case. The most recognizable of the ministers who served under Singh strode through the leafy streets of central Delhi to his colonial-era bungalow where he stood outside smiling, his wife by his side. Gandhi, 68, who rarely speaks in public off the campaign trail, rallied to Singh's cause in apparent recognition of his loyalty to her family, which last year was replaced by Prime Minister Narendra Modi as India's top political force. "We are fully behind him, we will fight this legally and with all the means at our command, we are sure that he will be fully vindicated," Gandhi said, flanked by the former defense and finance ministers who dominated government for a decade. Elsewhere, in the heartland state of Uttar Pradesh, hundreds of Congress workers briefly stopped trains in sit-in protests on railway tracks. A judge on Wednesday ordered Singh to appear on April 8 to explain his role in the illegal award of a coal field to a billionaire, a new blow for the Gandhi-led party that was engulfed by graft scandals towards the end of its rule. The show of unity contrasted with the treatment of late Prime Minister P.V. Narasimha Rao, who was kicked out of the Congress party after a 1996 election defeat and left to fight a corruption trial and other legal cases on his own. Rao, who with Singh pushed through reforms credited for two decades of fast economic growth, is rarely mentioned by Gandhi. He died in 2004. "Rao was disowned almost in the way Communist parties disowned purged leaders," veteran newspaper editor and commentator Shekhar Gupta said. WHO BENEFITS? The judge who summoned Singh questioned which officials and politicians could have gained financially from the decision to ignore guidelines and re-allocate a coal field in eastern India to Hindalco Industries. Some commentators believe Singh's loyalty to the Gandhis - despite being at times overruled by Sonia and her son, Rahul, during his time in office - blemished his record. "No matter how angry he may get with them, he is not going to blame them or rat on them," Gupta said. "He has put feudal family loyalty over public trust." A globally respected economist known for his integrity and humble lifestyle, Singh's premiership ended in ignominy as corruption scandals rocked the telecommunications, defense and coal ministries. He was seen as a personally honest but weak leader, and dominated by party president Gandhi, the Italian-born widow of late Prime Minister Rajiv Gandhi. Their son, Rahul, next in line to head a dynasty stretching back to India's first prime minister, was notable by his absence from the march. Rahul, who is expected to take over as party president when his mother steps down, took a leave of absence from politics a few weeks ago and is believed to be out of the country. - Reuters