Sony aims to extend VR content to films, no plans for smartphone-based headset 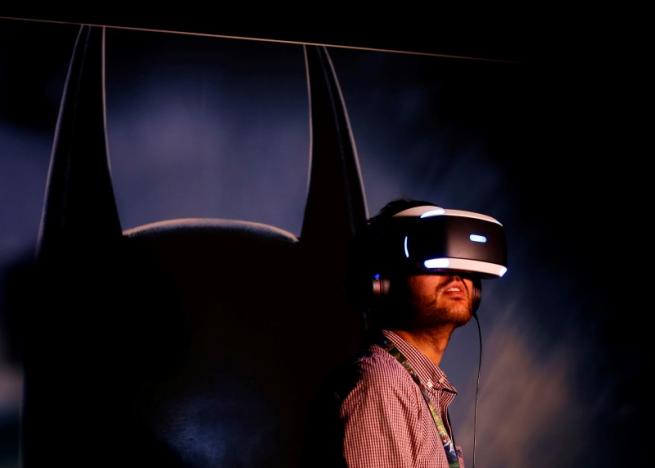 Sony aims to extend VR content to films, no plans for smartphone-based headset

CHIBA – Sony Corp (6758.T) aims to extend content for its dedicated virtual-reality (VR) headset into non-gaming areas such as TV and film, and has no plans to join the burgeoning market for smartphone-based headsets, its gaming division chief said.
Andrew House, Sony Interactive Entertainment Inc's chief executive, said in an interview on Thursday he was already in talks with media production companies to explore possibilities for the PlayStation VR headset, due for release on Oct. 13. "We are talking about years into the future, but these are interesting conversations to start having now," House said. House's gaming division has been one of Sony's main sources of profit in recent years as sales of TV sets and other once-core electronics goods decline in the face of price competition. As smartphone gaming now encroaches on the console market, Sony has opted to seek growth through innovations such as VR. However, analysts have said non-gaming content is necessary to broaden the appeal - and profitability - of VR. Sony's VR headset works in conjunction with its PlayStation 4 games console and will retail at a price lower than Facebook Inc's (FB.O) Oculus Rift and HTC Corp's (2498.TW) Vive headsets that require more expensive personal computers to run. But smartphone-powered headsets will be far cheaper and more portable because they use the smartphone screen as the display. There are well over 100 smartphone-based VR headsets from 65 developers already on the market, according to Lux Research. Alphabet Inc's (GOOGL.O) Google will add to that number with its Daydream VR platform that works with its Android mobile operating system. Sony's House argued that smartphones would not be capable of achieving the highest quality VR experience. "We are focused on great gaming VR experiences," he said. "I haven't seen a cellphone or mobile-based VR experience that really gets our content teams excited." House said, beyond gaming, Sony is looking into TV and film and will also concentrate on seeking "ways of bringing much more static experiences to life" in areas such as museums and planetariums. Sony has said it is working with more than 230 developers globally, and expects over 50 titles by the end of the year, include non-gaming content such as cartoons and music, karaoke and landscape videos. "It might not take so long for non-gaming content to contribute fully to Sony's VR-related business," said analyst Yu Okazaki at Nomura Securities. "Non-game content will help attract a wider audience to VR and consolidate Sony's strategy to build a solid PlayStation ecosystem and earn a profit out of it." –Reuters