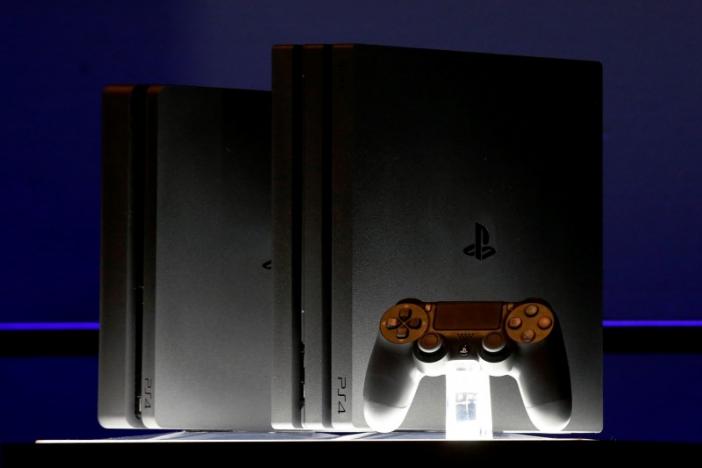 NEW YORK - Sony Interactive Entertainment, a division of Sony Corp, unveiled two new versions of its PlayStation 4 Console in an effort to help Sony maintain its sales lead over Microsoft Corp and Nintendo Co Ltd. The PlayStation 4 Pro, which will launch Nov. 10, will support higher resolution and more realistic imagery by enabling 4k resolution and higher dynamic range, said Andrew House, chief executive of Sony Interactive Entertainment, at a PlayStation event in New York City Tuesday announcing the new products. The console will cost $399. Additionally, the company unveiled a slimmer, lighter and more energy efficient version of its PlayStation 4 Console, which will come out Sept. 15 and will cost $299. PlayStation Pro, whose code name is "Neo," will support Sony's virtual reality headset, due to launch in October. The PlayStation VR headset will go on sale in the United States on Oct. 13 with 50 titles available by the end of the year, the company has said. Additionally, Sony will make an upgrade available that will enable all 40 million users of its PlayStation 4 console to upgrade to HDR, House said. Netflix Inc (NFLX.O) will launch a new app when the console launches with 600 hours of 4k content, including its hit crime series "Narcos," House said. Google's YouTube unit is also planning an app for PS 4 Pro, he said. Since the 2013 launch, Sony has sold more than 40 million units of the PlayStation 4 console, far outpacing Microsoft Corp's XBox One and Nintendo's Wii U. Sony has said the games business is set to be its biggest growth driver, helped by strong PS4 console sales, a rise in subscribers to its PlayStation network and the launch of its virtual reality headset. In the financial year through March 2017, Sony expects the gaming unit to account for 45 percent of its overall operating profit. Sony forecasts PS4 sales at 20 million units for this financial year, up from the previous year's 17.7 million units. -Reuters