Sousa beats Harrison to set up Goffin clash in Miami 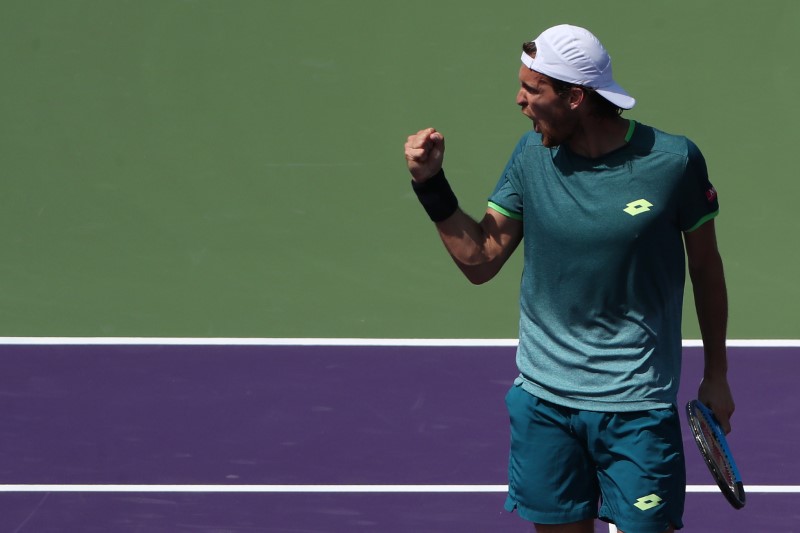 Sousa beats Harrison to set up Goffin clash in Miami

FLORIDA (Reuters) - Brazil’s Joao Sousa edged American Ryan Harrison 7-6(4) 7-6(4) in first round action at the Miami Open as unseeded players enjoyed a day in the limelight in Florida.

The big names start their campaigns at the weekend, allowing the 80th-ranked Sousa to enjoy the prestige of a centre court showdown in only his second career meeting against 53rd-ranked Harrison.

The American saved three match points in a tight contest before the Portugal-born Sousa prevailed in a little less than two hours.

Next up for Sousa is Belgian seventh seed David Goffin, who is scheduled to return after a left eye injury that has kept him out for the past month.

Goffin incurred the unlikely injury during a match in Rotterdam when a ball bounced off his racket and struck him at high velocity.

While Harrison made a quick exit, fellow American Jared Donaldson fared better with a 6-3 6-4 win over Marcos Baghdatis, of Cyprus.

One break in each set was enough for the 49th-ranked Donaldson, who also saved eight break points.

Australian Matthew Ebden outlasted Gilles Simon, of France, 6-3 6-7(2) 7-5 in more than two hours in a match that featured eight breaks of serve.

Edben, who lost to another Frenchman, Gael Monfils, in the first round in Indian Wells two weeks ago, fared better against Simon, particularly on the pivotal points.

The Australian converted five of his 11 break opportunities, while Simon could only take advantage on three of his 14 chances.