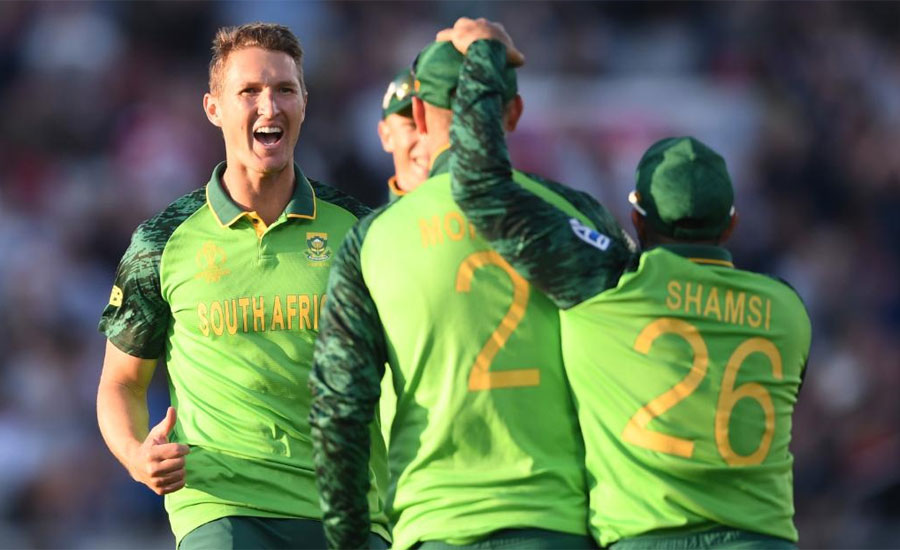 OLD TRAFFORD (Web Desk)-- England will face Australia in the World Cup semi-finals on Thursday after Aaron Finch's side were edged out by South Africa in a thriller at Old Trafford.

Australia fell 10 runs short in the competition's final group game and, as a result, will head to Edgbaston to face England while India, as group winners, will play New Zealand at Old Trafford on Tuesday. "It is going to be a blockbuster," said Australia captain Finch. "It doesn't get much bigger than England v Australia in a World Cup semi-final. "The fans are always entertaining down there (Edgbaston). It is going to be a fantastic atmosphere." Chasing 326 for victory, Australia fell to 95-3 and lost Usman Khawaja to a hamstring problem, but David Warner's imperious century gave the defending champions hope of a win. Wicketkeeper Alex Carey hit out in the final 10 overs as he scored a fine 85 but, with 51 needed from 28 balls, he holed out, and Australia could not regain the momentum. South Africa's total had been set up by a fine ton from captain Faf du Plessis and 95 from Rassie van der Dussen. Australia, meanwhile, will travel to Birmingham with injury concerns over three key players. Khawaja did come back out after going off early in Australia's innings but could barely run, Marcus Stoinis had treatment on his side while batting and Mitchell Starc appeared to feel some discomfort while bowling. Australia, who also face England in an Ashes series after the World Cup, looked downbeat as they left the field - something that will not have gone unnoticed by England. "If England have to take a snapshot of today, it would be at the end - Australia's batsmen consoling each other, the team as a whole looking dejected with hands in pockets," noted BBC cricket correspondent Jonathan Agnew. "They have got to lift themselves up now."

Were you watching, England?

Australia topped the group before Saturday's match but this defeat means they will now have to face England at Edgbaston - where they have not won a match in any format of the game since 2001. Eoin Morgan's England side had their top order blown away in the group stages by Australia - but they will have watched today with interest. South Africa got off to a fast start with their aggressive play in the opening stages. By taking advantage of an off-colour Starc, they forced captain Finch into early changes. For the first time, Australia looked unsure of where the breakthrough would come from. Australia used eight different bowlers in the opening 20 overs. If England, who have such a destructive top order, can do the same and play with careful aggression, they can put Australia on the back foot. Warner, though, was superb. South Africa should have run him out from the third ball of the innings but Kagiso Rabada threw to the wrong end and from there Warner barely looked back. Warner is not as aggressive as he was before his ban for his involvement in 'Sandpapergate' but the power is still there. England cannot afford to feed his strengths. There are opportunities for England, though. Carey has been a standout for Australia but he is the strongest link in a brittle middle order and Australia's innings subsided once he fell. There are the injury worries, too, for Australia: Khawaja could not run and had to retire hurt, Stoinis had three separate physio treatments on his side and Starc was gingerly touching his leg during his bowling spell.

South Africa end on a high

The Proteas have had a poor tournament but they continued their winning run over Australia - they have now beaten them in eight of their past nine one-day internationals. With opener Hashim Amla missing with injury, Aiden Markram and Quinton de Kock came out flying, and Du Plessis capitalised to hit the first century by a South African at this tournament. Van der Dussen manipulated the field and Australia's fearsome pace attack and, although he holed off the last ball going for the six that would have taken him to a century, he looks a good prospect for the future. De Kock was superb behind the stumps, affecting an audacious run out of Stoinis by flicking the ball on to the stumps, and he took a good catch to dismiss the dangerous Glenn Maxwell. While their death bowling is a concern - Chris Morris was flogged for 17 runs by Starc and Khawaja in the 48th over - they ultimately held their nerve to secure a consolation win. SOURCE: BBC NEWS