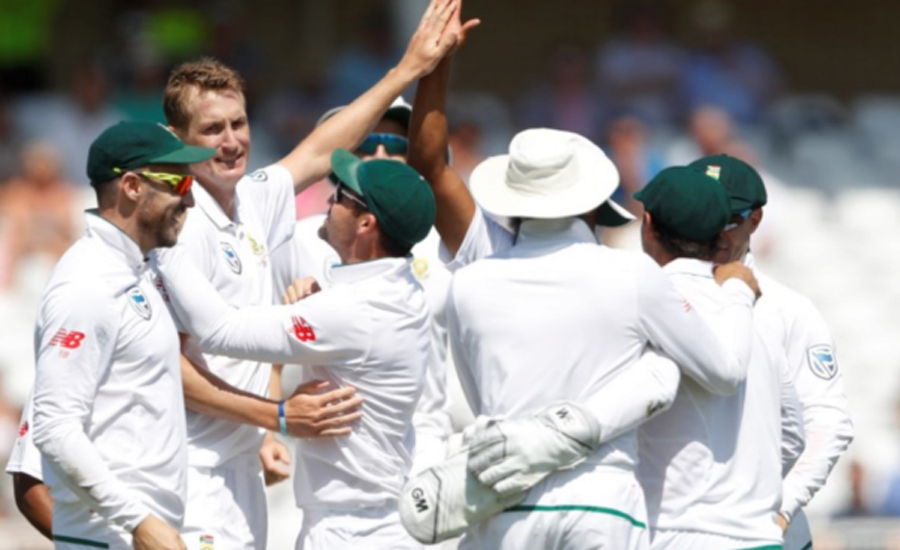 NOTTINGHAM (Reuters) - South Africa took full advantage of an abject England batting display on Monday to complete a crushing 340-run win in the second Test at Trent Bridge which levelled the series 1-1 with two games remaining.

Defeat was Joe Root's first as captain in his second game in charge, and England's eighth loss in 13 matches. But it was the manner of their capitulation inside 45 overs and with a day and a half to spare that will trouble Root most.

Instead of mounting the required rearguard action, England collapsed to 133 all out, with the last three wickets falling without the addition of a run.

The wickets were shared among four bowlers with man-of-the-match Vernon Philander (3-24), Keshav Maharj (3-42) and Chris Morris (2-7) taking the honours.

South Africa outplayed England in every aspect of the game, with the tourists' first innings lasting one ball longer, at 96.2 overs, than England's two combined.

Hopes that England might chase down a world-record 474 runs for victory were dispelled by the second over when Philander removed Keaton Jennings' off-stump, following up soon afterwards by having Gary Ballance for lbw.

Both Jennings (3) and Ballance (4) will find their positions under pressure after contributing just 44 and 85 runs respectively in four innings this series.

With their departure, England looked to Root and former captain Alastair Cook for resistance but the excellent Morris claimed both batsmen before lunch, bowling Root (8) and bouncing out Cook (42) with a vicious lifter.

The hosts fell away alarmingly after the interval when Jonny Bairstow and Moeen Ali surrendered their wickets to poor shots while Philander removed the dangerous Ben Stokes with the sharpest of return catches.

The final indignity came when Stuart Broad, Mark Wood and Jimmy Anderson all fell on 133, leaving former England captain Michael Vaughan to post on Twitter, "This is absolutely terrible ....... Far too much talent in this team to play like this."

Root offered a more diplomatic assessment, saying: "It has been a tough week. We weren't good enough with the bat for the whole game. We prepared very well and had two good practice days."

England have delayed selection ahead of the third test, which starts at the Oval on July 27, and could make changes.

By contrast, South Africa's captain Faf du Plessis was delighted, dedicating the win to absent coach Russell Domingo, who missed the game following a family bereavement. "It was for Russell," he said.

Du Plessis added he admired the way his side refused to relinquish their stranglehold once they got on top.

"It was important to get into a position of strength and not lose our momentum," he said.