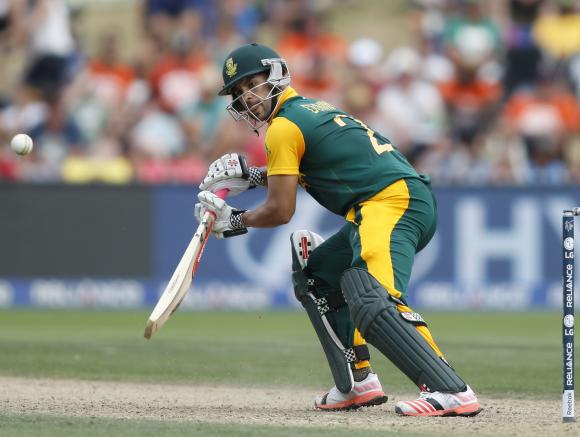 AUCKLAND - South Africa recalled all-rounder JP Duminy after his recovery from injury in place of Farhaan Behardien for their cricket World Cup Pool B match against Pakistan at Eden Park on Saturday. Pace bowler Vernon Philander also passed a fitness test but South Africa decided to stick with Kyle Abbott. With rain forecast later in the day, captain AB de Villiers elected to field after winning the toss. South Africa have amassed more than 400 runs in their last two matches and the boundaries behind the bowlers are short at Eden Park because of the ground's dual function as a cricket and rugby union ground. However, with the ball swinging late for Trent Boult then Mitchell Starc last week 19 wickets for fell for just over 300 runs in the Pool A match between co-hosts New Zealand and Australia. Pakistan have steadily improved throughout the tournament after they were thrashed by West Indies in Christchurch and their bowling, headed by the towering left-arm fast bowler Mohammad Irfan, is strong. But their fielding has been poor and their upper batting order short of runs, with the exception of captain Misbah-ul-Haq. Another veteran, Younus Khan, replaced the injured Haris Sohail in the Pakistan team and Sarfraz Ahmed came in as opener in place of Nasir Jamshed, who has been in terrible form. (Reuters)