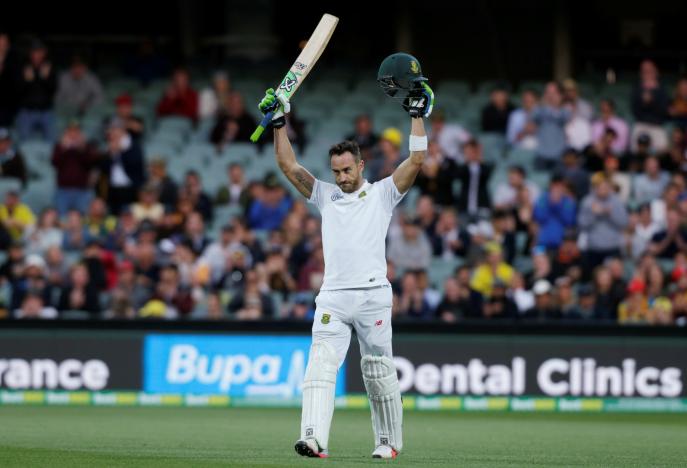 ADELAIDE – South Africa skipper Faf du Plessis silenced the boos of the Adelaide crowd with a defiant century before declaring on 259-9 and giving his bowlers a crack at Australia in the final hour of the opening day of the day-night third Test on Thursday. Australia got through the final 12 overs without loss but the declaration prevented Dave Warner from opening the batting as he was off the field towards the end of the South African innings. Matt Renshaw, one of three new caps in the Australia side, and Usman Khawaja faced the new pink ball instead but they were only able to put 14 runs on the board and will resume on eight and three respectively on Friday. Du Plessis's timely declaration capped what must have been an extremely satisfying first day for the South African, who came to the crease to catcalls with his side tottering at 44-3 but departed to an ovation after hitting 118 not out. Two days after being fined for ball-tampering during the second Test victory that sealed the series with a match to spare, du Plessis showed just the sort of grit and determination that Australia have been looking for from their batsmen. The hosts have far fewer concerns about their pace attack and Josh Hazlewood, Mitchell Starc and the recalled Jackson Bird earlier showed why with a fine display of fast bowling that had the first seven batsmen caught behind the wickets. Hazlewood took 4-68, while Starc and Bird pitched in with two wickets each as the Australian quicks bowled disciplined lines with the pink ball on the Adelaide track. Du Plessis had won the toss and decided to bat first but the first session went decisively to the hosts. Dean Elgar, Hashim Amla and JP Duminy were despatched for five runs apiece after opener Stephen Cook had earned a reprieve when Starc trapped him lbw only for the TV replay to show the left-armer had overstepped the mark. Cook was unable to add to his series-best tally of 40 after the tea break before edging Starc to Steve Smith in the cordon and when Temba Bavuma (8) got an outside edge to a Bird delivery, the tourists were 117-5. As on his Test debut at the same ground in 2013, when he hit 110 not out to help South Africa bat out four and a half sessions for a draw, it was left to du Plessis to frustrate the Australians. He put on 32 with Quinton de Kock for the sixth wicket before Hazlewood served up another peach of a delivery to send the wicketkeeper back for 24, with Vernon Philander (4) following soon afterwards. It was just after the end of his 54-run partnership with Kyle Abbott (17) that he secured his sixth Test hundred with two runs to fine leg off the 147th ball he faced. As South Africa entered unfamiliar territory in their first night session in Test cricket, du Plessis put on another 39 runs with debutant left-arm finger spinner Tabraiz Shamsi (18 not out) before bringing an end to the innings. –Reuters