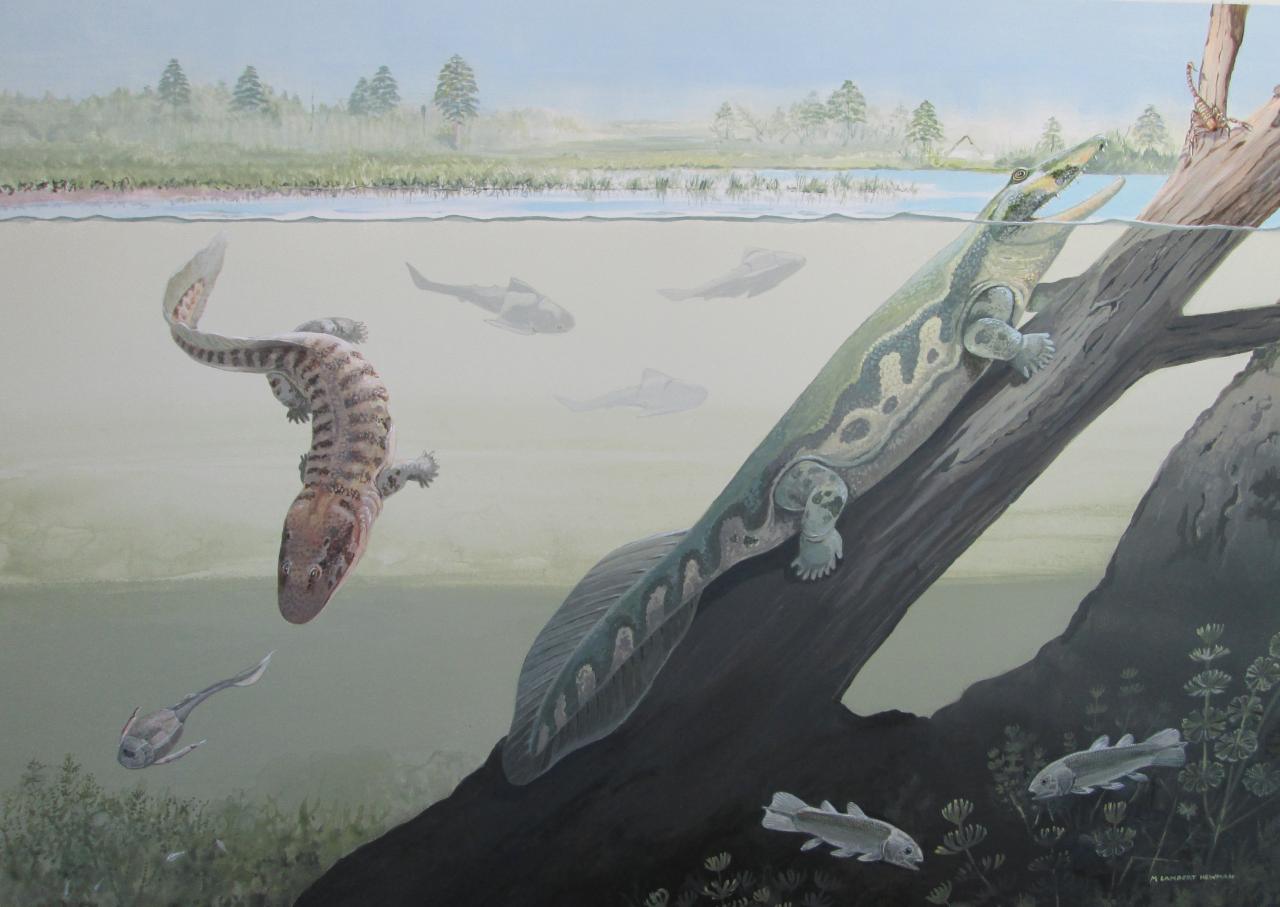 WASHINGTON (Reuters) - Fossils of two amphibians that lived within the Antarctic circle 360 million years ago are forcing scientists to rethink the origins of land vertebrates, including where these pioneers first appeared and the climatic conditions that spawned them. Scientists said they have unearthed partial remains of primitive Devonian Period amphibians named Tutusius umlambo and Umzantsia amazana at a site called Waterloo Farm near Grahamstown, South Africa. While the fossils are fragmentary, the researchers said Tutusius and Umzantsia most likely shared the four-legged, alligator-crossed-with-a-fish body plan of the earliest amphibians, eating small fish while in the water and perhaps small invertebrates while on land. Umzantsia was about 28 inches long (70 cm) with a long, slender lower jaw, apparently armed with small pointed teeth. Tutusius, known from a single shoulder girdle bone, was about a yard (metre) long. It was named in honour of South African Anglican cleric and human rights activist Desmond Tutu. They were among the early wave of tetrapods, a group including all land-living vertebrates. The first tetrapods evolved from fish during the Devonian. Until now, it had been thought that this evolution revolution occurred in warm climes because the fossils of all the earliest-known amphibians, as well as their fish forerunners, had been found in places that were tropical or subtropical at the time. Africa during the Devonian was part of a super-continent called Gondwana that also encompassed South America, India, Australia and Antarctica. The Waterloo Farm site was within the Arctic circle. “So we now know that tetrapods, by the end of the Devonian, lived all over the world, from the tropics to the Antarctic circle,” said palaeontologist Robert Gess, based at the Albany Museum in Grahamstown as part of the South African Centre of Excellence in Palaeosciences, centred at the University of the Witwatersrand. “So it’s possible that they originated anywhere and that they could have moved onto land anywhere. It really broadens the scope of possibilities,” Gess added. The Waterloo Farm site was a river-mouth environment, a tidal estuary opening onto the sea, and likely had a cold climate akin to northern Norway’s Atlantic coast, said palaeontologist Per Ahlberg of the University of Uppsala in Sweden. “There would certainly have been several months of winter darkness, as well as midnight sun in the summer,” Ahlberg said, adding that it probably snowed in wintertime. The research was published in the journal Science.