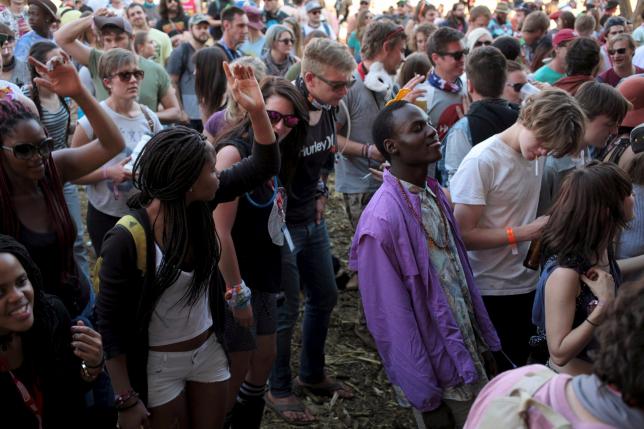 OPPIKOPPI, South Africa – Once a year thousands of South Africans descend on a patch of bush in Limpopo for a festival as old as their democracy, throwing up a town of tents and a haze of smoke and dust as if in a rush for the platinum buried deep beneath their feet. But no one is here for the minerals. These revelers come in search of a different kind of rock. Oppikoppi, Afrikaans for "hilltop", is South Africa's take on California's Coachella or Britain's Glastonbury, with its roots firmly in Afrikaans rock and folk music. As with many aspects of the self-styled "Rainbow Nation", much has changed in the two decades since apartheid, and the festival now attracts South Africans of every hue. Though still predominantly Afrikaans, a broad array of South Africa's eleven languages are spoken in the crowds and sung from stages in scenes unthinkable to the rigidly conservative, race-based regime that yielded to Nelson Mandela in 1994. Like Glastonbury, Oppikoppi revels in pushing the boundaries of taste and acceptability, with one popular act this year being a band called "Satanic Dagga Orgy", who sing in English - dagga being the South African term for marijuana. "We have a much more diverse crowd these days," Oppikoppi organizer Carel Hoffmann, who once worked as an engineer at a nearby platinum mine, told Reuters. "Many of the things we are doing the old regime would never have allowed." The music has also changed, with hiphop and its South African township version, known as kwaito, added to the staple of Afrikaans guitar and vocals. There is no danger of a washout, as so often happens with Glastonbury, as August is deep in South Africa's dry season. Oppikoppi's defining color is ochre brown and the chant of hard-core festival-goers "In dust we trust". From humble beginnings, with just 300 music-lovers in 1994, Oppikoppi has grown to become a sprawling temporary settlement surrounding a ring of large stages. This year it attracted 20,000 festival-goers, and with nothing except a few platinum mines dotting the horizon, organizers expect it to keep on growing. Most people camp in a crowded dustbowl called "Mordor", so named to distinguish it from the relative luxury of the "tented hotels". One such an establishment, billing itself "The Last Resort", prides itself on its "0.5 star" status - complete with luxuries such as phone chargers and portable toilets. –Reuters