South Korea aims for high-level talks about talks with North 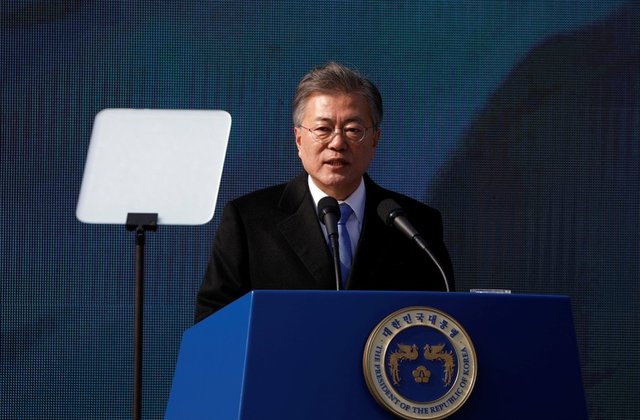 South Korea aims for high-level talks about talks with North

SEOUL (Reuters) - South Korea will seek high-level talks with North Korea this month as preparations for a summit began on Friday, the presidential chief of staff said, while officials in the South expressed interest in a separate summit with the United States.

If North Korea agrees to the talks, they would be the first North-South contact since a South Korean delegation returned from a meeting with North Korean leader Kim Jong Un this month and a chance for North Korea to break its silence on promised engagements with the South and the United States.

The talks about talks come after the head of the US Pacific Command said the United States could not be overly optimistic about the outcome of any summit between US President Donald Trump and Kim, aimed at ending the North’s nuclear and missile programmes, and must go into it with “eyes wide open”.

Admiral Harry Harris told the US Senate Armed Services Committee he believed the United States would stick to its demand for the “complete, verifiable, irreversible denuclearisation” of the Korean peninsula.

“We’ve decided to narrow down the agenda topics to denuclearising the Korean peninsula, securing permanent peace to ease military tension and new, bold ways to take inter-Korean relations forward,” said Im, who is head of the preparation team.

The isolated state has always maintained it will continue to develop its nuclear weapons as a deterrent against US aggression but, according to South Korea, it later said it was open to abandoning the programme if the security of its regime was guaranteed.

Im added Moon may meet Trump after the inter-Korean summit but before Trump’s planned summit with Kim in May.

An exact time and location for the Trump-Kim meeting have not been set.

North Korea’s state media has yet to comment on the pending summits with Moon and Trump, but Foreign Minister Ri Yong Ho is visiting Sweden for talks with his Swedish counterpart Margot Wallstrom. Ri’s trip prompted speculation it could lay the groundwork for the summit in Sweden between Trump and Kim.

The push for the two summits came after the North Korean leader said in a New Year’s address that he wanted to improve relations with the South following a year of heightened tension.

The reactor could be used to produce weapons-grade plutonium, but North Korea is believed to already have enough fissile material for multiple nuclear bombs, according to Joshua Pollack, a senior research associate at the Middlebury Institute of International Studies at Monterey.

An official at the South’s defence ministry said authorities were aware of the Jane’s report, which follows a similar one released on the 38 North website earlier this month that said a nearby reactor had also continued to show signs of operation.