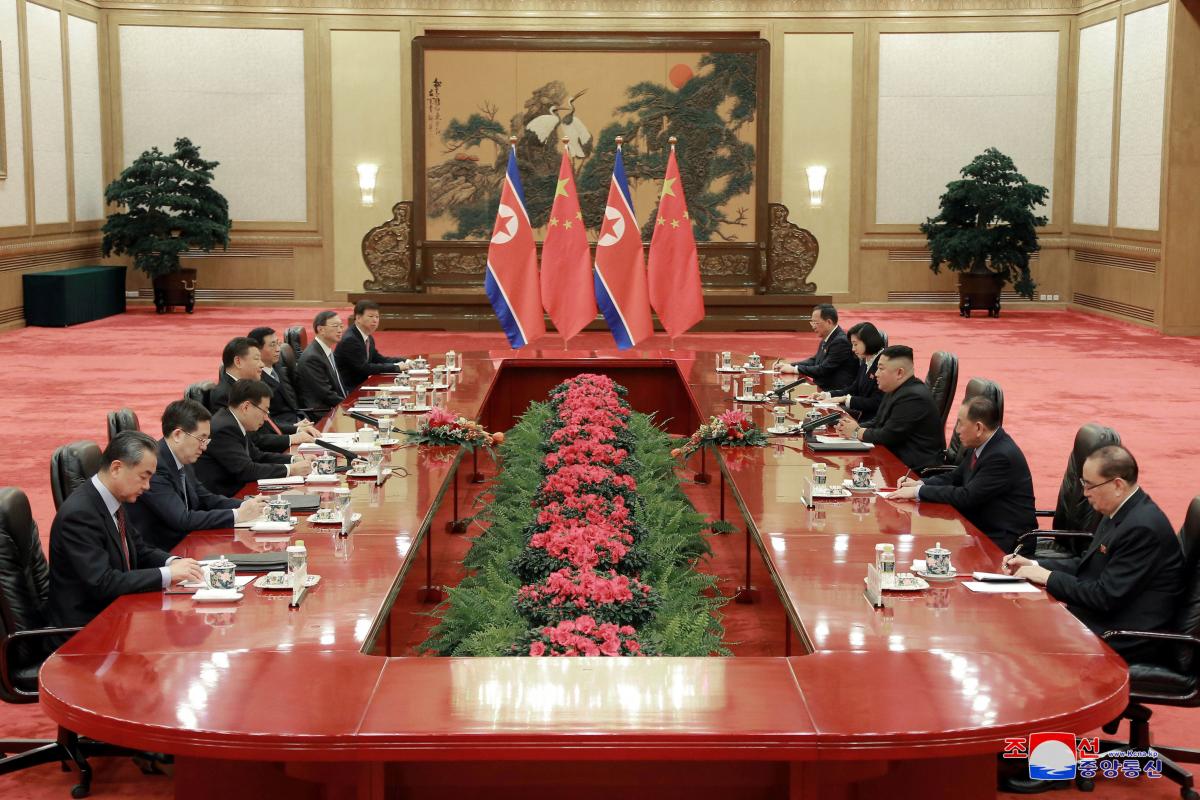 SEOUL/SHANGHAI (Reuters) - China and South Korea called for concessions from the United States as well as North Korea, ahead of a possible second summit between North Korean leader Kim Jong Un and US President Donald Trump, suggesting a US pressure campaign aimed at the North’s denuclearisation may be slipping.
South Korean President Moon Jae-in said on Thursday that he would cooperate with the international community to at least partially ease sanctions to allow for some inter-Korean business and tourism ventures, while later noting that Pyongyang needed to take “bold steps” towards denuclearisation to win concessions from Washington. “I think North Korea knows that they clearly have to denuclearise for the easing of international sanctions, and the US also understands that there needs to be corresponding action to expedite the North’s denuclearisation,” Moon told reporters at the presidential Blue House. Chinese President Xi Jinping hosted Kim in Beijing this week and said he hoped the United States and North Korea would “meet each other halfway,” Chinese state media reported. China, the North’s lone major ally, and US-backed South Korea have been key players in two years of “maximum pressure” led by the United States, but both countries are signalling an increased willingness to ease sanctions and improve ties with North Korea. Pyongyang and Washington have been struggling to find a breakthrough despite a pledge by Kim at a landmark summit with Trump in Singapore in June to work towards denuclearisation “of the Korean peninsula”. North Korea, which has been developing nuclear and missile programmes in defiance of UN Security Council resolutions, has demanded Washington lift sanctions and declare an official end to the 1950-53 Korean War. Those demands were in response to Pyongyang’s initial, unilateral steps towards denuclearisation that included dismantling its only known nuclear testing site and a key missile engine facility. North Korea has rejected calls for unilateral disarmament, and has said it is now up to the United States and the international community to make concessions like easing sanctions. For its part, the United States has instead increased sanctions and said it will not lift the measures until North Korea takes more steps towards giving up its arsenal of nuclear weapons and long-range missiles. In prepared remarks for his annual New year speech, Moon made no mention of any steps North Korea needs to take, instead focussing on the economic benefits of making peace with North Korea. But when pressed by journalists at a briefing afterward, Moon said North Korea should take more steps, such as abandoning its missiles and dismantling weapons production lines and other nuclear complexes, to secure US concessions such as sanctions relief. He said reducing US military commitments, such as a withdrawal of troops or strategic assets from the region, would be an unlikely option for Washington. North Korea used the reference to denuclearisation “of the Korean peninsula” in the past to include the removal of the US nuclear umbrella in the region. “The second summit would be a venue where they settle on terms of what specific measures North Korea will take and how those moves will be reciprocated by the United States,” Moon said. “But US forces in South Korea or strategic assets in places like Guam and Japan are not linked with North Korea alone, as they exist for the stability and peace of the entire Northeast Asia.”

Kim renewed his resolve to meet Trump again during his meeting with Xi in Beijing this week. Moon said Kim’s latest trip to Beijing signalled that a second Trump summit was imminent. Another US-North Korea summit would also expedite an unprecedented visit by Kim to Seoul, planned for last year but delayed amid the nuclear standoff, Moon said.

“I expect we’ll hear about high-level talks between North Korea and the United States before long for their second summit,” Moon said. US Secretary of State Mike Pompeo made several trips to Pyongyang last year. However, a meeting between Pompeo and senior North Korean official Kim Yong Chol has yet to be rescheduled after an abrupt cancellation in November. North Korean state news agency KCNA said on Thursday Kim and Xi held “in-depth, frank discussions” on the Korean peninsula and nuclear issues during Kim’s stay in Beijing, his fourth since March 2018. Kim told Xi about the difficulties and concerns in improving North Korea-US relations and denuclearisation negotiations, KCNA said. Xi agreed that North Korea’s reasonable concerns must be addressed properly, it said. KCNA reported that Xi once again accepted Kim’s invitation to visit Pyongyang, but Chinese officials would not provide further details. China’s official Xinhua news agency also said Pyongyang’s “legitimate concerns” must be taken seriously in order to achieve a comprehensive resolution. Xinhua quoted Xi as saying he hoped that North Korea and the United States could meet each other half way and that the international community expected peaceful negotiations. “The political settlement of the peninsula issue faces a rare historic opportunity,” said Xi, who “spoke highly of the positive measures taken by the (North Korea) side to maintain peace and stability and promote the realization of denuclearisation on the peninsula.” Kim reiterated a pledge from his New Year’s speech that the North would try to make a second summit achieve a result that the international community would welcome, Xinhua said. Wang Yiwei, a senior research fellow at the Center for China and Globalization, said he believed North Korea was becoming impatient and beginning to lose hope with the United States for asking it to make changes without in turn removing sanctions. “The crux is how to let North Korea denuclearise and to give it security guarantees. On this, the United States and North Korea don’t have trust, so China has to act as a bridge,” Wang said.