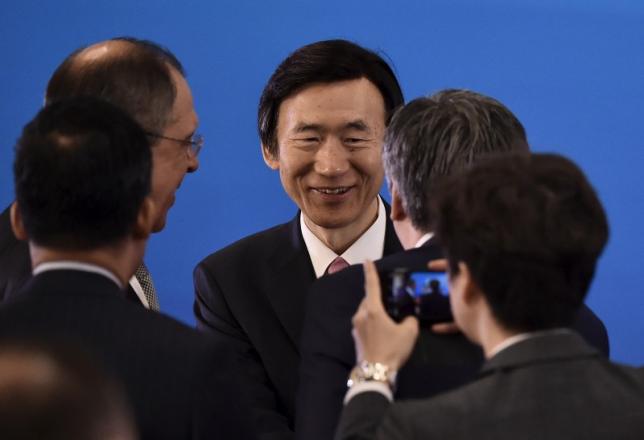 SEOUL - South Korea's foreign minister will visit Moscow next week after touring Cuba, Uganda and Iran as part of a push to enlist North Korea's old allies to press for change in the isolated state, Seoul said on Tuesday. North Korea has come under growing diplomatic pressure since its January nuclear test and a space rocket launch in February, which led to a new U.N. Security Council resolution in March tightening sanctions against Pyongyang. "The minister's visit to Russia following Iran, Uganda and Cuba is part of diplomatic efforts to enlist the international community to the effort to bring about change in North Korea on all fronts," South Korean Foreign Ministry spokesman Cho June-hyuck told a briefing. South Korea said last week that Ugandan President Yoweri Museveni has pledged to halt security and military cooperation with North Korea following a summit in Kampala with South Korean President Park Geun-hye. Foreign Minister Yun Byung-se visited Cuba, a first for the country's top diplomat, and held talks with his counterpart, Bruno Rodriguez, at the weekend. South Korean media said Yun conveyed Seoul's hope for establishing diplomatic ties with Havana. In May, Park made the first visit to Iran by a South Korean leader in the hope of broadening political and commercial ties after Iran emerged from years of economic sanctions in January. Cho also said Poland had stopped issuing visas for North Korean workers amid concern that Pyongyang may be subjecting them to conditions that violated their human rights. The Polish embassy in Seoul did not have immediate comment. North and South Korea are technically still at war because their 1950-53 conflict ended in an armistice, not a peace treaty. North Korea has 53 embassies and overseas missions, according to South Korean government data, some of which have been notorious for engaging in business, including illicit activities. Much of North Korea's support at the United Nations is from fellow members of the Cold War-era Non-Aligned Movement. It has enjoyed consistent backing in U.N. General Assembly votes on human rights from a core group including Belarus, Cuba, Egypt, Iran, Syria, Vietnam, Zimbabwe and Venezuela. US Secretary of State John Kerry, speaking in Beijing at the end of high-level talks between the United States and China, said on Tuesday the two countries were determined to fully enforce sanctions against North Korea. -Reuters