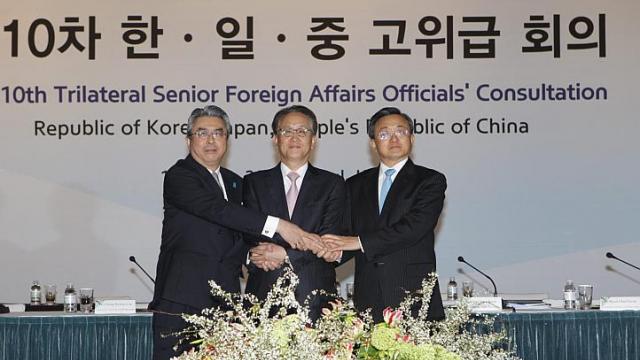 SEOUL – The foreign ministers of South Korea, China and Japan will meet on Saturday in Seoul for the first time in nearly three years in a bid to restore cooperation between the three Asian economic powers, South Korea's foreign ministry said. South Korea and China's ties with Japan have chilled over what they view as Japan's reluctance to properly atone for its wartime past. Both South Korea and China also have territorial disputes with Japan. But ties between China and Japan have shown signs of warming over recent months and South Korea's foreign ministry said senior officials from the three countries had met recently and the foreign ministers aimed to put trilateral cooperation back on track. "The meeting is the first in about three years since April 2012 and is expected to lay the foundation for restoring a mechanism for three-country cooperation," the ministry said in a statement on Tuesday. Three-way summit meetings of the countries' leaders, which had been held annually from 2008, have also been on hold since May 2012. The foreign ministers' meeting would signal progress in the push to restore three-way ties amid pressure from South Korea and China for Japanese leaders to take steps to show they fully recognize the country's past during World War Two. South Korean President Park Geun-hye, who has yet to have a formal meeting with Japanese Prime Minister Shinzo Abe, said this month Japan was an important partner which shared the principle of free democracy and market economy. "Now it's time for Japan to courageously and sincerely recognize historic reality and go hand in hand with South Korea as partners to write a new history for the next 50 years," Park said on March 1. South Korea has accused Japan of trying to "undermine" an apology issued in 1993 to Asian women forced to work as wartime sex slaves in Japanese brothels, known as "comfort women", by conducting a review of it last year. Abe and Park met briefly with US President Barack Obama, who is seen as trying to mend ties between the two US allies, a year ago at a nuclear security summit. Japan's ties with China also remain frosty despite Abe meeting Chinese President Xi Jinping for the first time last November at an Asia-Pacific forum. Both China and Japan claim a tiny group of islets in the East China Sea while South Korea and Japan have a separate dispute over tiny islands. – Reuters