South Korea pushes back at Japan in forced labour row 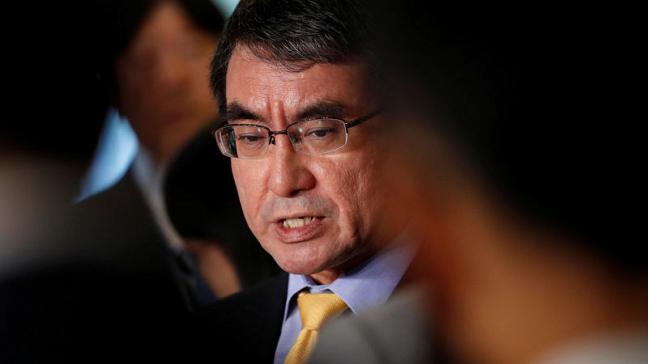 South Korea pushes back at Japan in forced labour row

SEOUL (Reuters) - Japan should avoid aggravating historical tensions in a diplomatic row over South Koreans forced to work for Japanese firms during World War Two, South Korea’s foreign ministry has warned. South Korea’s top court ruled last month that Japan’s Nippon Steel & Sumitomo Metal Corp must compensate four South Koreans for their forced labour during the war, which Japan has denounced as “unthinkable.” The binding court verdict is straining relations between the neighbours and could affect their bilateral efforts to rein in North Korea’s nuclear programme, analysts say. Japan and South Korea share a bitter history that includes Japan’s 1910-45 colonisation of the Korean peninsula and the use of comfort women, Japan’s euphemism for girls and women, many of them Korean, forced to work in its wartime brothels. Japan’s Foreign Minister Taro Kono said in a Bloomberg interview on Sunday that “it would be difficult for any country to do anything with the South Korean government” if a court can reverse Seoul’s agreements made under international law. Kono’s remarks threatened to add fuel to the controversy, South Korea’s foreign ministry said late on Tuesday. “South Korea is very concerned that Japan’s leaders in positions of responsibility are disregarding the root cause of the issue...and continue to make comments that rouse our public’s emotions,” the ministry said in a statement. “The Japanese government must be clearly aware that excessive political emphasis on the present case will be of no help to the future-oriented relationship between South Korea and Japan,” the ministry added. The row was triggered by a Supreme Court ruling that Nippon Steel pay 100 million won ($87,700) to each of the four steel workers who sought compensation and unpaid wages, saying that their rights to reparation was not terminated by a 1965 treaty. On Tuesday, Kono repeated Japan’s stance that the issue had been resolved “completely and finally” by the 1965 agreement, and that it was up to the South Korean side to respond to the matter of any further compensation. South Korea’s national security adviser Chung Eui-yong said on Tuesday that “if the Japanese government keeps on giving an unyielding response, our government cannot refrain from responding in kind.” A South Korean appeals court is set to rule on a similar case of compensation claims against Mitsubishi Heavy Industries in December.