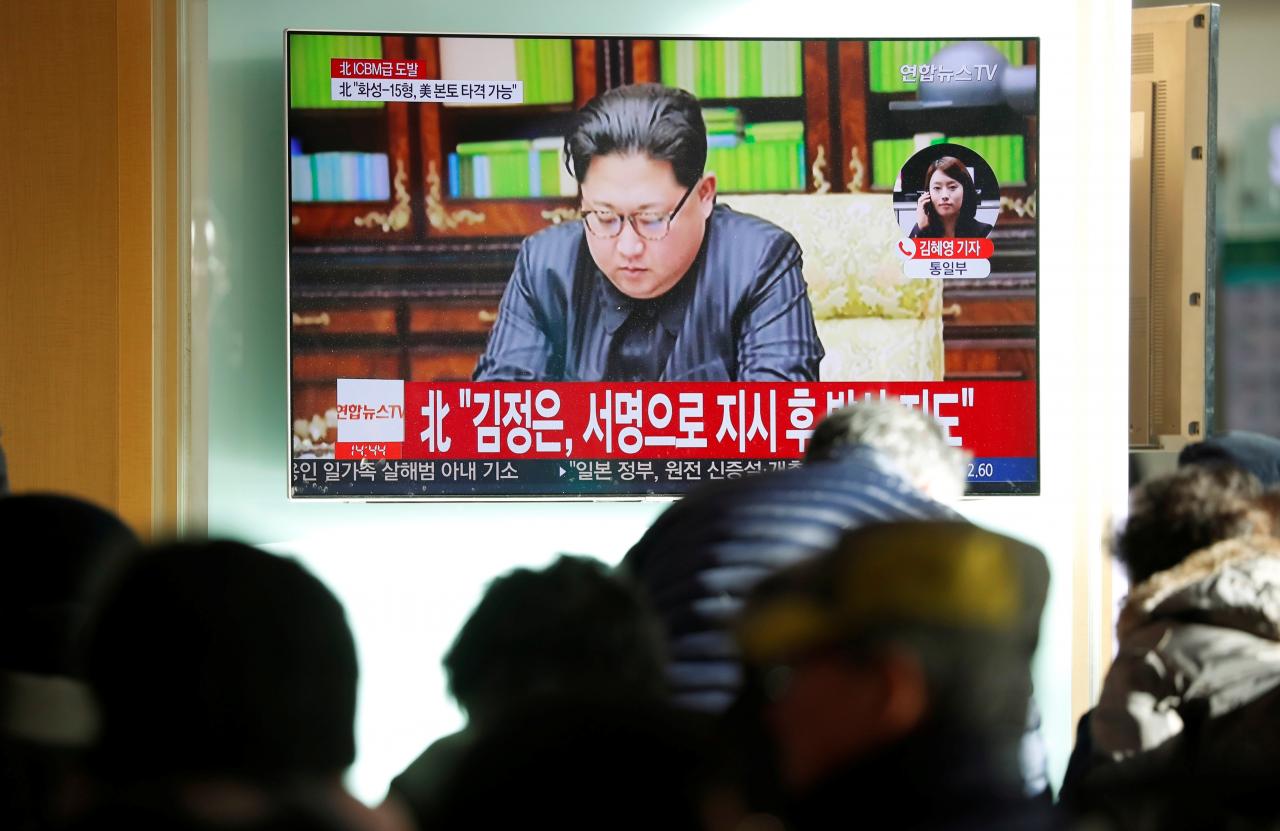 But South Korea said it expected Pyongyang to now pause its provocative missile testing programme, after the success of its new Hwasong-15 missile that can fly far enough to hit the US mainland.

Pyongyang has said its Wednesday missile test was a “breakthrough” and leader Kim Jong Un said the country had “finally realised the great historic cause of completing the state nuclear force”.

“Kim changed the launch time, direction and distance in order to display he has this great power....he will probably make a great announcement in his New Year’s Address that the North has completed its weapons programme.”

South Korea’s Ministry of Defence said the Hwasong-15 missile was a new type of intercontinental ballistic missile (ICBM) which can fly over 13,000 km (8,080 miles), placing Washington within target range.

South Korean President Moon Jae-in on Thursday told US President Donald Trump that despite the technical issues needed to be settled, the new missile was North Korea’s most advanced.

According to an analysis by South Korea’s military, Yeo told lawmakers at a parliamentary session the first stage engine of the Hwasong-15 missile was a clustering of two engines from Hwasong-14 missiles, which are also ICBMs that were test-launched in July this year.

Yeo said the Hwasong-15 is two metres (six feet) longer than the Hwasong-14, while the second-stage engine requires further analysis.

In order to curb further provocations from the North, US strategic assets will continue to be rotated on and near the Korean peninsula until the Pyeongchang Winter Olympics next February, Yeo said.

South Korea’s Unification Ministry said it believed that North Korea was unlikely to engage in more missile and rocket tests anytime soon due to a number of reasons, including the northern hemisphere winter season.

“For now if there are no sudden changes in situation or external factors, we feel there is a high chance North Korea will refrain from engaging in provocations for a while,” said Lee Yoo-jin, deputy spokeswoman at the Unification Ministry.

North Korea is known to test fewer missiles in the fourth quarter of the year as troops are called to help with harvests, while the cold temperature is a strain on its fuel supplies.

This week’s missile launch was the first in 75 days.

The latest provocation from the North prompted more insults from Trump, who referred to North Korea’s leader Kim Jong Un as “Little Rocket Man” and a “sick puppy”.

Trump on Thursday also dismissed a Chinese diplomatic effort to rein in North Korea’s weapons programme as a failure, while Secretary of State Rex Tillerson said Beijing was doing a lot, but could do more to limit oil supplies to Pyongyang.

Despite international condemnation and UN sanctions, North Korea has continued on its path towards developing a nuclear-tipped missile that could hit the United States.

After North Korea released video footage and photographs of Hwasong-15, analysts have said they appeared to show the North was indeed capable of delivering a nuclear weapon anywhere in the United States and could only be two or three tests away from being combat ready. Trump and Moon pledged to continue applying strong sanctions and pressure on North Korea to bring it to talks. Addressing an emergency UN Security Council meeting after this week’s missile launch, the United States warned North Korea’s leadership it would be “utterly destroyed” if war were to break out.