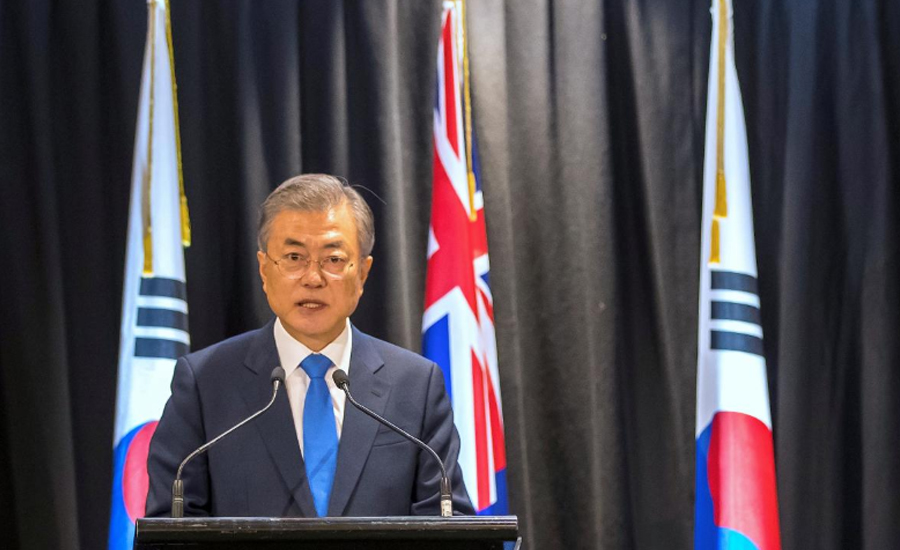 WELLINGTON (Reuters) - South Korean President Moon Jae-in said on Tuesday a visit to Seoul by North Korean leader Kim Jong Un was “a possibility” and that such a trip would help to improve Pyongyang’s relationship with the United States. Moon made the comment when asked by reporters during a state visit to New Zealand about the likely timing of a possible trip to Seoul by Kim, who held summits with Moon and U.S. President Donald Trump this year. “This will be the first time that a North Korean leader will visit South Korea so, although there is no time frame set for that, still that’s very meaningful,” Moon said.
He said such a visit would “accelerate the denuclearization in the Korean peninsula” and result in a “greater stride in relations improvement” between the North and the United States.
South Korea has been seeking to balance progressing its relationship with the North while also keeping Washington onside. Trump and Moon announced after their landmark summit in Singapore in June that they had agreed to work toward the denuclearization of the Korean peninsula, although the two sides have since made little progress agreeing on a timeline or other concrete steps. North Korea, has been angered by Washington’s refusal to ease sanctions and has warned it could resume development of its nuclear program. U.S. Vice President Mike Pence said last month Trump would push for a concrete plan outlining Pyongyang’s moves to end its nuclear and missile programs. Trump signaled on Saturday he was likely to meet Kim again in January or February. Moon spoke shortly after a meeting with New Zealand Prime Minister Jacinda Ardern where they discussed how to secure a denuclearized Korean peninsula. “New Zealand’s stance on nuclear non-proliferation is clear and it is our hope that 2019 will see further progress toward achieving denuclearization of North Korea in a complete, verifiable and irreversible manner and an enduring peace on the Korean peninsula,” Ardern said in an emailed statement. New Zealand has been working with the United States to help small Pacific nations audit and strengthen their shipping registers to avoid vessels with ties to North Korea using their flags to skirt sanctions. Multiple ships linked to prohibited North Korean activities were identified after a training workshop with 14 Pacific nations in July, a senior U.S. State Department official told Reuters, without identifying how many ships or the countries involved. Reuters reported in 2017 that Fiji had identified more than 20 vessels with ties to North Korea using its flag illegally.