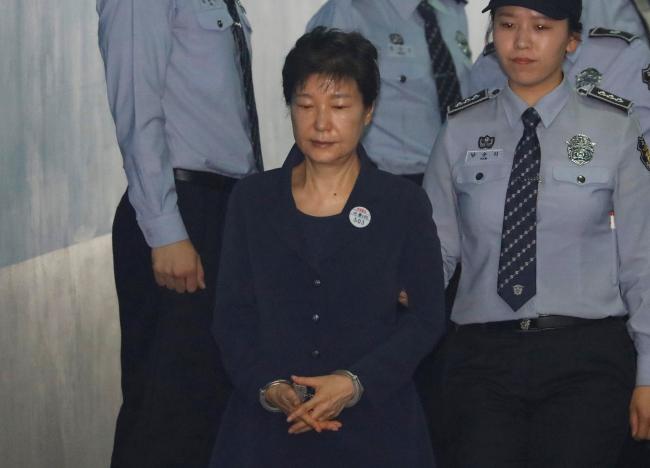 SEOUL - South Korea's former leader Park Geun-hye abused her power and pressured companies to pay her tens of millions of dollars in bribes, a prosecutor told a Seoul court at the start of her corruption trial on Tuesday.

If found guilty of taking bribes from business leaders including Samsung Group scion Jay Y. Lee, one of the key accusations that led to her impeachment, Park faces more than 10 years in jail.

Park, the country's first democratically elected leader to be removed from office, is charged with taking bribes worth about 29.8 billion won (20.47 million pounds) from Lee alone.

"The accused deny even the most basic facts but the charges are fully supported by material evidence and testimonies."

Park has denied any wrongdoing and pleaded not guilty at the trial. Her lawyers rejected the 18 charges against her in pre-trial proceedings. Lee has also rejected charges he bribed Park in return for favours for Samsung.

"There was no reason for president Park to force companies to donate money which she was unable to use for herself," Park's lawyer Yoo Yeong-Ha told the court.

"There were no monetary gains she could have had personally from the establishment of the two foundations, as no individuals could freely take funds from the foundations," said Yoo, referring to two sporting foundations formed to support Park's policies.

Park's court appearance is the first time she has been seen in public since her arrest in March. She arrived at court handcuffed and wearing a navy pantsuit, her hair held back in a haphazard bun and her face showing little sign of make-up.

In the courtroom she sat grim faced, her eyes puffy and looking straight ahead, next to a lawyer sitting with Choi Soon-sil, the friend accused of colluding with Park to take bribes.

The two, who are being reunited for the first time since the scandal erupted in public in late October, did not acknowledge each other or exchange words as they entered the courtroom.

Media reported Park said she did not want a jury trial. Defendants have the right to be tried by a jury although its decision is not binding and can be changed by the presiding judge.

Park said little during the first day of her trial, conferring quietly with her lawyer Yoo.

In contrast, Choi was tearful when she addressed the court.

"I have been serving president Park for the past four decades. I feel very sorry for causing president Park to stand trial like this," she told the court, half sobbing, adding Park is "not a person who can be lured by bribes".

The court adjourned around midday, with the next trial day scheduled for Thursday, May 25.

Many Park supporters were seen on the court grounds when Park arrived and at the entrance of the holding correctional facility where Park has been held, waving the national flag and demanding her release.

The first day of the trial comes two weeks after the election of President Moon Jae-in, who has promised to get tough on chaebol bosses who commit crimes.

Park was arrested on March 31, three weeks after she was removed from office by a Constitutional Court ruling and after a warrant judge decided she posed a flight risk and was likely to tamper with evidence.

Media reports said she spent her time in her prison cell awaiting trial reading the English dictionary and keeping away from the news available for inmates.

A lottery last week for 68 public seats available for the trial drew more than 500 people, most of them young people in their 20s and 30s.

Heo Go-eun, a 22-year-old university music major said she had cut her classes that day to enter the lottery.

"This will remain a page in history and I wanted to see for myself Park on trial," said Heo, adding she had participated in the candlelight rallies last year that drew millions of South Koreans to the street in peaceful protests. "So many people are just happy Park has been impeached, that she has already paid the price for her crimes but this is just the beginning." -Reuters