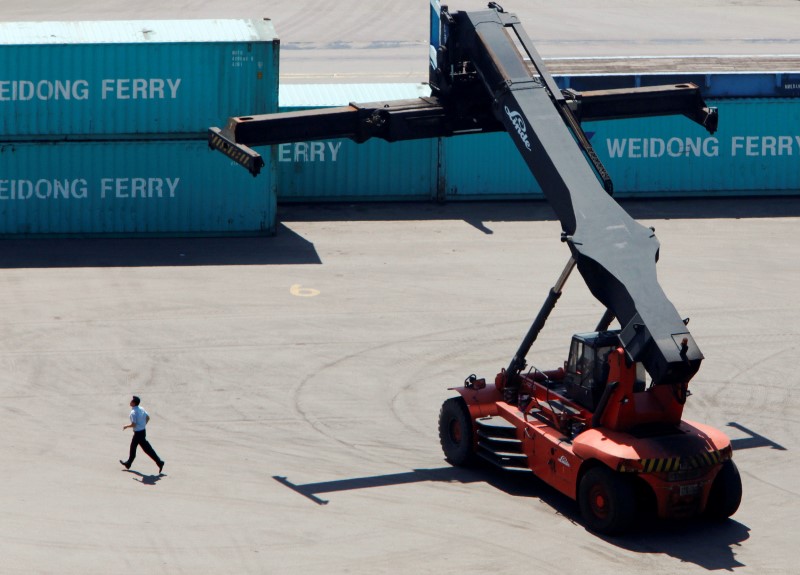 SEOUL (Reuters) - South Korea’s export growth came to a halt in June, as shipments of cars and consumer electronics fell sharply, casting a shadow over prospects for this year amid escalating trade tension between China and the United States, data showed on Sunday. Exports totaled $51.2 billion, down 0.1 percent from a year earlier, below a gain of 0.4 percent forecast in a Reuters survey and falling back after a 13.2 percent jump in May, government data showed. Imports were up 10.7 percent from a year ago, underperforming the survey’s forecast for an 11.4 percent increase. The export sector’s sudden loss of growth may herald tougher times after a stellar performance over the past year, as Asia’s fourth largest economy could become caught in the crossfire following the retaliatory imposition of tariffs by the US and China, as well as the European Union. “China-US trade will be hit with a new set of tariffs starting July 6, and that’s clouding the outlook for Korean exports in the second half,” said Lee Sang-jae, chief economist at Eugene Investment & Securities Co. in Seoul. The weaker export performance was also partly down to a statistical base effect from particularly strong export growth in June 2017, when South Korea won major shipbuilding contracts, Lee also said. Of the nation’s 13 major export items, shipments of seven items including semiconductors, petrochemical products and computers gained, according to the nation’s trade ministry. Car exports dragged the overall exports by declining 9.9 percent on-year, while exports of display panels and consumer electronics dropped 10.5 percent and 21.6 percent, respectively. By destination, exports to China surged 29.8 percent, while shipments to the US gained 7.6 percent year-on-year for the first 20 days of June. Shipments to ASEAN countries and the Middle East declined 1.3 percent and 10.4 percent, respectively. Policymakers worry that South Korea’s exports to China, its biggest trading partner, could suffer from any decline in US-China trade because a large chunk of Korean exports to China are intermediate goods used in products assembled for sale elsewhere. Commenting on outlook for China-bound exports, Korea’s trade ministry said frictions between the US and China “could put downward pressure” and squeeze South Korean shipments to China in the second half even as economic growth in the world’s second biggest economy looks stable. The government is expecting annual economic growth of 3 percent this year, supported by the chip boom and an increase in fiscal spending.