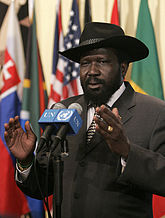 JUBA - South Sudan President Salva Kiir on Wednesday dismissed the threat of UN sanctions after the Security Council passed a resolution this month that set up a framework for introducing punitive measures. Kiir also told South Sudanese at a rally in Juba that the government was ready to continue fighting rebels if they preferred war, comments likely to frustrate African mediators and Western powers trying to end more than a year of conflict. The United States and others have shown increasing annoyance with Kiir and rebel leader Riek Machar, the former deputy president, whom they blame both for putting personal political ambitions above the need for peace in the world's newest nation. "The threat of sanctions has been waved in my eyes ... but I cannot be threatened with that," Kiir told thousands of supporters in Juba's Freedom Square, the site of its independence celebrations in mid-2011. Kiir said he appreciated foreign efforts to bring peace to but said he was "disappointed" that some of the international community had focused on sanctions "rather than encouraging the peace building process". The UN Security Council approved a US-drafted sanctions regime on March 3 but did not impose travel bans and asset freezes on officials or an arms embargo. Washington said the aim was to tell those who chose war over peace that they would be held to account. The United States and European Union have already independently imposed travel bans and asset freezes on commanders on both sides. Peace talks have made glacial progress. Both sides agree in principle to sharing power but have failed agree on how that would work in practice. The latest round of peace talks in Ethiopia broke down on March 8. At least 10,000 people have been killed and 1.5 million civilians have fled their homes in violence during which both sides have been accused of ethnic-based atrocities, mass rapes, and using child soldiers. Kiir, once a rebel commander in the war against Sudan's government before independence, said rebels had rejected his peace overtures. "If they prefer to fight for their victory, I think I am ready to fight back," he said. - Reuters