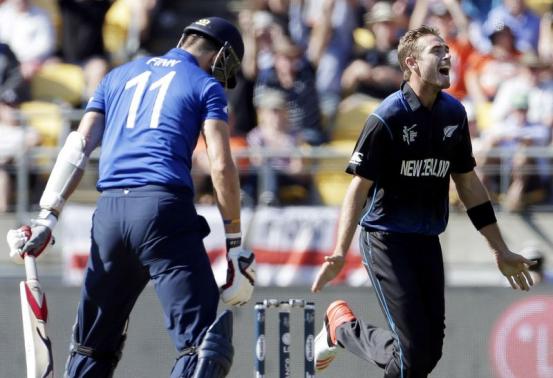 WELLINGTON (Reuters) - Tim Southee produced a brilliant spell of swing bowling for career-best figures of 7-33 before Brendon McCullum plundered an 18-ball half-century as New Zealand destroyed England by eight wickets in their World Cup Pool A match on Friday. Southee's performance saw England dismissed for 123, with Joe Root top-scoring with 46, before New Zealand captain McCullum's 77 from 25 balls helped the co-hosts roar to victory in 12.2 overs at Wellington Regional Stadium. New Zealand's celebrations were delayed 40 minutes to allow for a scheduled innings break, though needing only 12 runs with nine wickets in hand. McCullum took 18 runs off pace bowler Stuart Broad's first over, the second of the innings, and then 20 off seamer Steven Finn, who had immediately replaced Broad. He then belted four successive sixes off Finn's next over, which went for 29 runs. New Zealand were 96-0 after six overs with their captain seemingly intent on pushing an already dispirited England further into despair. McCullum was bowled by Chris Woakes with a full toss after hitting eight fours and seven sixes. Kane Williamson (nine) and Ross Taylor (five) completed the win. McCullum's innings, the fastest half-century at a World Cup, threatened to overshadow the superb bowling effort by Southee, who produced the best figures by a New Zealand bowler in one-day internationals. Shane Bond's 6-19 against India in 2005 was the previous best. Southee did not get much movement in sunny conditions at the top of the innings after Eoin Morgan had won the toss and decided to bat but still managed to bowl Moeen Ali (20) and Ian Bell (eight) with yorkers that did swing late. Southee was ably supported by Trent Boult, who put pressure on the top order with an eight-over opening spell in which he took one wicket for 30 runs. Left arm spinner Daniel Vettori then dried up the runs in the middle overs and captured the wicket of the out-of-form England captain. Root and Morgan, who had scored a total of two runs in his previous five knocks, tried to consolidate England's innings, though their run rate was pedestrian with the skipper struggling with his timing and confidence. Vettori heaped more pressure on the beleaguered Morgan when he was brilliantly caught in the deep by Adam Milne for 17. Southee then produced a spell of five for 10 in four overs to set up the platform for victory.