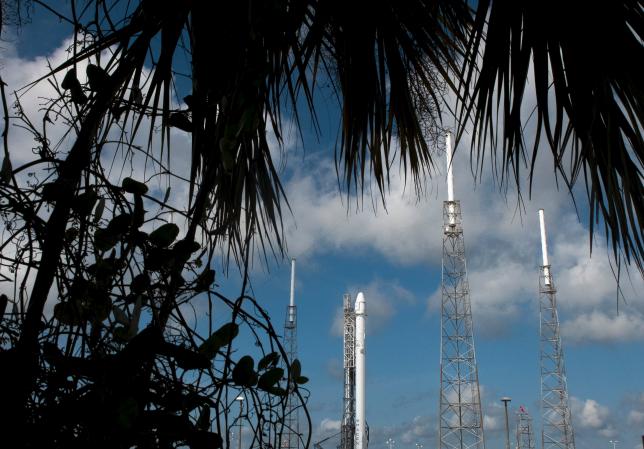 CAPE CANAVERAL - The launch of an unmanned SpaceX rocket - and an innovative attempt to land it on an ocean barge - were postponed on Monday due to poor weather at the Florida launch site, officials said. The rocket, carrying a Dragon cargo ship bound for the International Space Station, had been slated to blast off Monday afternoon from Cape Canaveral Air Force Station, located just south of NASA’s Kennedy Space Center. Thick clouds and nearby rain showers scuttled the launch less than three minutes before liftoff. The flight was rescheduled for 4:10 p.m. EDT/2014 GMT on Tuesday. Once the rocket dispatches its upper-stage and Dragon capsule, it is programmed to flip around, fire engines to steer its descent and deploy landing legs to touch down on a customised barge stationed about 200 miles (322 km) off the coast of Jacksonville, Florida. At a prelaunch press conference on Sunday, SpaceX Vice President Hans Koenigsmann put the odds of a successful landing at 75 or 80 percent. During a previous landing attempt in January, the rocket ran out of hydraulic fluid for its steering fins, causing it to crash into the platform. A second attempt in February was called off because of high seas, but the rocket successfully ran through its pre-programmed landing sequence and hovered vertically above the waves before splashing down and breaking apart. “It looks right now like weather is significantly better. We did also upgrade the drone ship so it can keep position better,” Koenigsmann said. After demonstrating a successful ocean landing, SpaceX intends to bring its rockets back to a landing pad at the launch site so the boosters can be refurbished and reflown, slashing launch costs. “It’s a long-term goal,” Koenigsmann said. The primary purpose of the flight, the 16th of a Falcon 9 rocket, is to deliver more than 4,300 pounds (1,950 kg) of food, clothing, equipment - including an Italian-made espresso machine - and science experiments to the station, a $100 billion research laboratory that flies about 260 miles (418 km) above Earth. SpaceX is one of two companies hired by NASA to fly cargo to the station following the retirement of the space shuttles. In addition to a recently extended 15-flight NASA contract, worth more than $2 billion, SpaceX is working on a passenger version of the Dragon capsule and has dozens of contracts to put commercial communications satellites into orbit. The company also is working on a heavy-lift version of the Falcon rocket, which uses 27 engines, compared with the nine currently flying. The Falcon Heavy is expected to make its first test flight late this year. - Reuters