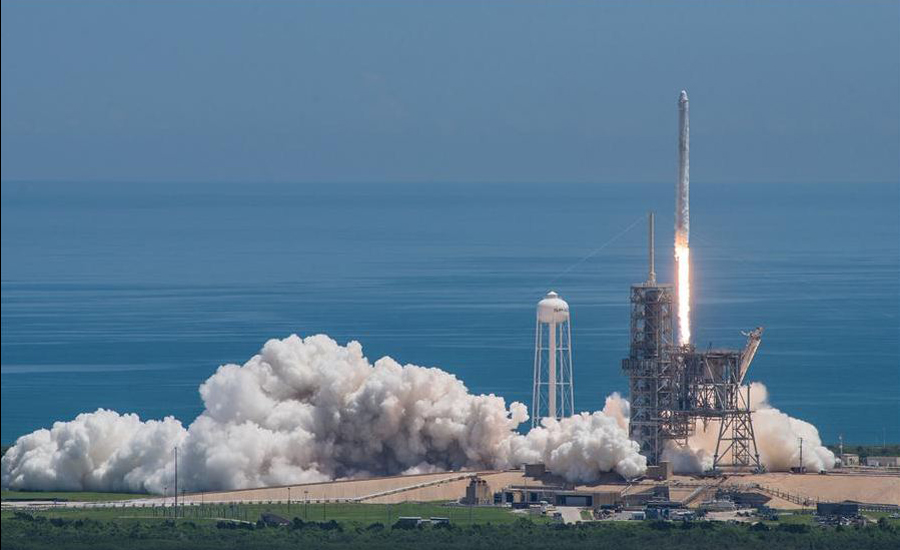 WASHINGTON (Xinhua) -- SpaceX's Dragon spacecraft was launched on Wednesday on a way to bring worms, liquid fuel and other new experiments to the International Space Station. The spacecraft, riding on a Falcon 9 rocket, lifted off at 1:16pm EST at the Launch Complex 40 at Cape Canaveral Air Force Station in Florida. It is the sixth resupply mission to the space station this year. About 10 minutes after the launch, the spacecraft reached its preliminary orbit, then deployed its solar arrays, starting multiple thruster firings to reach the space station. The spacecraft, which flew to the space station in February of 2017, is carrying 36,000 roundworms in pouches to the orbiting lab and if goes well, about two or three million ones will come back to earth. It is part of a study that may offer a better understanding of why muscles deteriorate in microgravity. "They're a great model for using to study human changes, even though they're just a 1-mm-long worm," said Timothy Etheridge, the principal investigator of the mission. "Their muscles are both structurally and functionally extremely similar to people, so even more so when we're talking about understanding muscle changes, worms are a very good model." The findings can improve methods to help astronauts maintain their strength during future space travel and also lead to new treatments for the elderly who chronically suffer from muscle loss. Also, a new robotic refueling mission traveling with the Dragon spacecraft called Robotic Refueling Mission-3 (RRM-3) will practice transferring and storing liquid methane in space for the first time. The ability to resupply propellant and coolant enables longer journeys than a single tank of propellant would allow, which can applied to future human exploration missions, according to NASA. Jill Mcguire, project manager of RRM-3, said the mission's goal is to help get NASA to Mars and beyond. Another experiment on board is a near-infrared laser-imaging instrument to map the canopy of Earth's tropical and temperate forests in 3D. The investigation is expected to tell how much carbon is stored in the world's forests and the impacts of forest changes on lives. Among the new experiments sent to the space station are the growth of ordered crystals of antioxidant proteins in microgravity that can protect the body from the effects of radiation and some harmful chemicals, and a mice study to understand the physiology of aging and the role it plays on the progression of disease in humans. The Dragon spacecraft will travel for about two days before astronauts used the station's robotic arm to berth it, unloading about 2,500 kilograms of tools, supplies and equipment. SpaceX attempted to recovered the reusable first stage of Falcon 9 on land but it lost control and made a water landing in Atlantic Ocean about eight minutes after the liftoff.