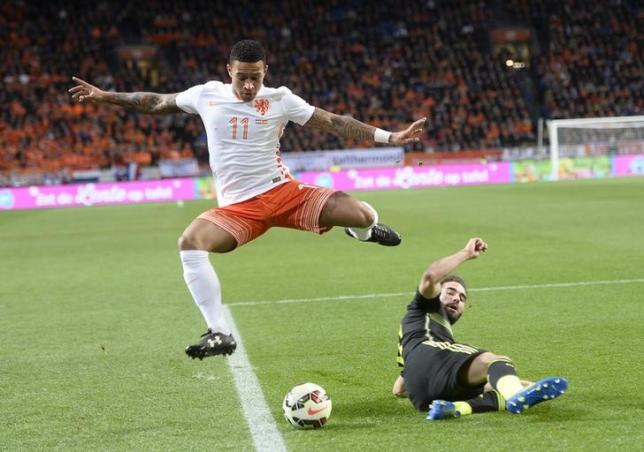 MADRID - Although Spain's 2-0 reverse to Netherlands on Tuesday brought back bitter memories of their disastrous 2014 World Cup, coach Vicente del Bosque will not be too worried about a third straight friendly defeat for La Roja. Netherlands, whose 5-1 drubbing of Spain in the group stage in Brazil last year marked the end of the Iberian nation's six-year domination of the world game, scored two early goals at the Amsterdam arena and held on against some determined Spain pressure in the second half for a 2-0 success. They became the first team to inflict two defeats on Del Bosque since he took over in 2008 but the gruff 64-year-old had used the match to try out several new faces and he fielded a largely experimental, second-string team. Malaga forward Juanmi and Sevilla midfielder Vitolo became the 55th and 56th players to debut under Del Bosque, while the likes of goalkeeper David de Gea, defenders Raul Albiol, Juan Bernat and Dani Carvajal and midfielder Mario Suarez all started the game. "The national team's state of health is good," centre back Gerard Pique told reporters. "We are in a process where players are coming into the team and gathering experience," added the Barcelona defender. "We are second in qualifying (for Euro 2016) and these friendly games are for experimenting. "I am not that worried about this match because we lost friendlies in previous years and then ended up winning titles." Del Bosque will be confident he can find the right mix of players to secure Spain's berth at Euro 2016 in France next year, when they will be chasing an unprecedented third straight title. Slovakia are the surprise leaders in qualifying Group C thanks to a 2-1 win over Spain in Zilina in October and have a maximum 15 points from five of 10 matches. Spain are second on 12 points, three ahead of Ukraine, who they beat 1-0 in Seville on Friday. Del Bosque's side host Slovakia in September in a match that could decide who goes through to the finals as group winners. "The team is in good shape," forward Pedro told reporters. "We have a very clear idea of our playing style and we are able to count on people who are gradually making a place for themselves in the team." Spain's next outing is a Group C qualifier away to Belarus on June 14. - Reuters