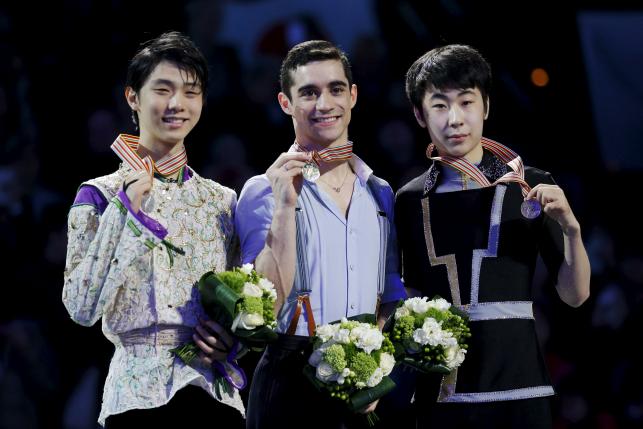 BOSTON – Spain's Javier Fernandez produced a spectacular free skate to overhaul Olympic champion Yuzuru Hanyu and retain his men’s title at the world figure skating championships in Boston on Friday. Fernandez, who was second behind Japan's Hanyu after the short programme, was near flawless in the free skate on the way to a score of 216.41 points, skyrocketing his total to 314.93 and a clear victory. "Emotion is everything," Fernandez said. "To repeat, a second title in a world championship is something not easy and these past months have been tough sometimes with some injuries and some pains. "So to be able to perform today and perform good in front of everybody ... it was unbelievable. "I’m so glad I think the people enjoyed it and that for me is the most important thing." Hanyu took silver with 295.17 points and Chinese teenager Jin Boyang won bronze on 270.99. The Japanese was well below his best and posted just 184.61 in the free skate, falling and losing balance on other occasions. Canadian Olympic silver medallist and Four Continents champion Patrick Chan settled for fifth place.