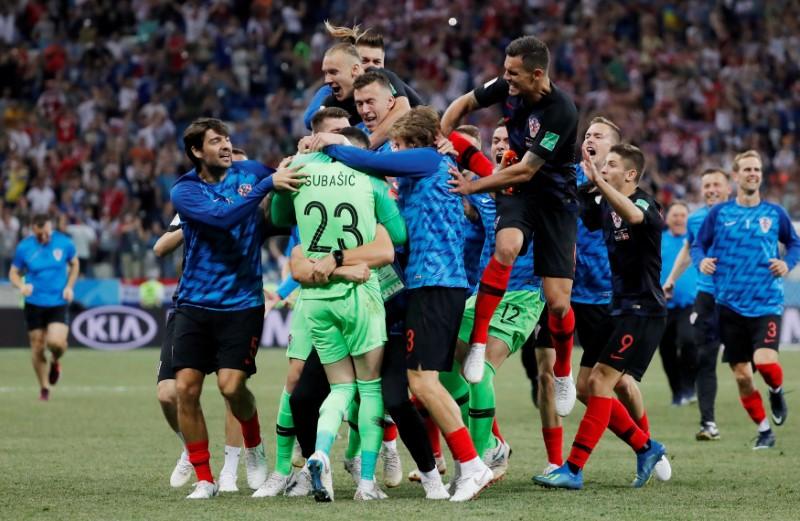 NIZHNY NOVGOROD, Russia (Reuters) - Croatia showed none of the spark that marked their romp through the group phase but still did enough to edge Denmark in their round-of-16 clash on Sunday and ensure they will take on Russia in the World Cup quarter-finals next weekend.
They triumphed 3-2 on post-match penalties after a 1-1 stalemate at the Nizhny Novgorod Stadium, having squandered a chance to wrap up the match five minutes from the end of extra time, though they had come back after conceding in the first minute. Denmark goalkeeper Kasper Schmeichel made a brilliant stop to deny Luka Modric’s penalty in extra time and then saved twice more in the post-match shootout but still came out on the losing side as Croatia now go to Sochi to meet the hosts, who had earlier on Sunday knocked out Spain in similar fashion. Modric put aside the anguish of squandering what surely would have been the match winner to bravely step up again in the shootout and convert one of his team’s kicks. “It can happen that you miss a penalty but I am fascinated with his determination to shoot after he missed in extra time,” said Croatia coach Zlatko Dalic.

“He took the responsibility as a true captain and it speaks volumes for Luka. He said it himself `I’m going to take a penalty in the shootout`. Can you imagine if he had not scored? But he is a great player.” Croatia goalkeeper Danijel Subasic made three saves in the shootout –- only the second to do so in World Cup history after Portugal’s Ricardo against England in 2006.
Soccer Football - World Cup - Round of 16 - Croatia vs Denmark - Nizhny Novgorod Stadium, Nizhny Novgorod, Russia - July 1, 2018 Denmark's Christian Eriksen and Simon Kjaer look dejected after losing the penalty shootout REUTERS/Darren Staples
“He was our hero tonight, he saved three penalties in a shootout,” said Dalic. “You don’t see that every day. He pulled us through when we needed him most.” It was a game that started with two chaotic goals and finished with high drama but in between was banal and pedestrian. Mathias Jorgensen took all of 57 seconds to breach the Croatia defence at the end of a long throw-in by Jonas Knudsen, stabbing at the ball with his left foot as he took it off team mate Thomas Delaney to score the quickest goal of the tournament. The lead lasted one minute and 52 seconds and there was an element of comedy to the equaliser for Mario Mandzukic.

A kick across the Danish defence was firmly cleared by Henrik Dalsgaard but straight into the face of team mate Andreas Christensen, creating a pinball effect that saw the ball fall for Mandzukic, who then expertly turned it into the net from just metres out. Chances thereafter were rare and play was repeatedly broken with Denmark’s defence resolute but their occasional attacks languid, and talisman Christian Eriksen missed a telling contribution. Croatia sparked only occasionally too. “It was really the small margins that decided it,” said Denmark coach Age Hareide. “We had a fair chance to win against Croatia. I think we did well to stop them playing given they have very good players.” Croatia had catapulted themselves into the category of ‘strong outside bet’ for World Cup glory after impressive group wins but Russian fans will now have more confidence in their team’s chances in the next round. “I am going to say to my lads that we will now be playing the best team in the World Cup,” said Dalic about Saturday’s quarter-final. “We must not be arrogant, it will be a huge test for us. But we have come so far, we do not intend to stop here, but I’m sure Russia thinks the same.”