PM Nawaz Sharif says power crisis will be overcome in 2-3 years; inks MoU with Norway on cooperation in solar energy

PM Nawaz Sharif says power crisis will be overcome in 2-3 years; inks MoU with Norway on cooperation in solar energy

OSLO – Prime Minister Nawaz Sharif has said that Pakistan is facing an acute shortage of electricity and loadshedding will be controlled in two-three years. During a meeting with Norwegian Prime Minister Erna Solberg, he sought cooperation on hydro-electric project. Later addressing the joint press conference, Prime Minister Nawaz Sharif said the two countries have signed a Memorandum of Understanding on cooperation in solar energy. Earlier addressing the Oslo Summit on Education for Development on Tuesday, he said that his government is paying special attention to education in the areas affected by terrorism.“Despite challenges, Pakistan has been able to reduce the number of out-of-school children by 600,000, the literacy rate has gone up further by two per cent and net enrolment ratio has improved by four percent.” The prime minister said that education should be top priority of the international community. “Education is top priority of my government. The provinces are now spending even more than quarter of their annual budgets on education. The federal government too has also doubled its spending on education,” he maintained. The prime minister said spending on education as a percentage of GDP would be increased from two to four percent in his tenure. He said their priority in education is to reduce dropout rate, improve quality of education and ensure good governance in education. “It is also our priority to improve quality of teacher and provide technical and vocational training to students.” Nawaz Sharif called for unity to fight illiteracy and ignorance to make the world a better place for humanity. [caption id="attachment_32728" align="alignnone" width="500"] 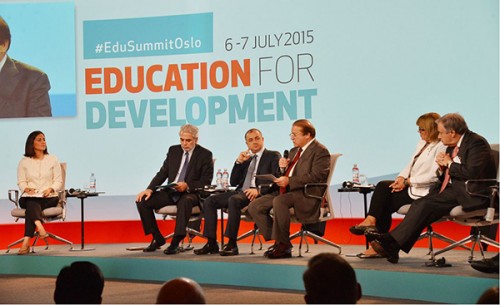 Prime Minister Nawaz Sharif speaks at the Oslo Summit on Education for Development in Oslo.[/caption]