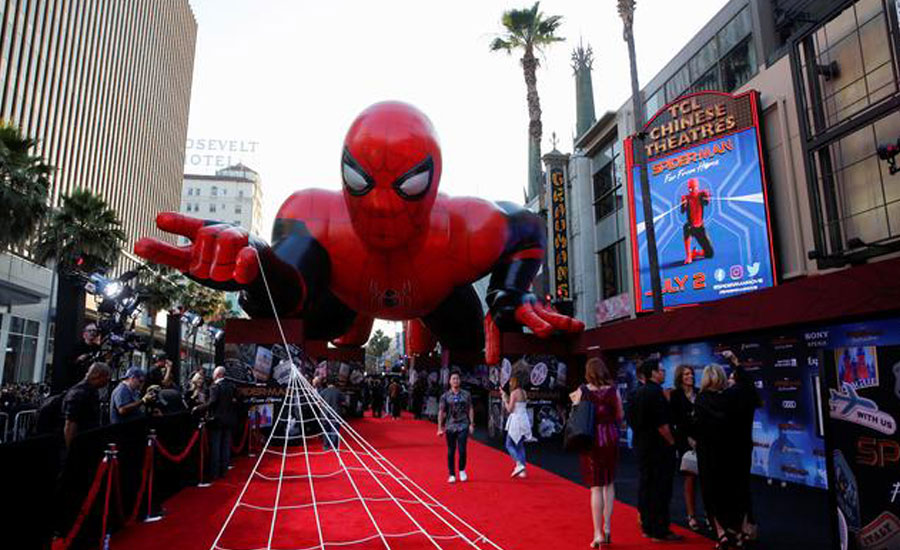 LOS ANGELES, (Variety.com) - Superheroes were once again around to save the day as “Spider-Man: Far From Home” ignited a much-needed boost in the domestic box office. The web-slinging adventure easily dominated in North America, delivering a $185 million debut from 4,636 venues during its first six days in theaters. But even your friendly neighborhood Spider-Man isn’t immune to a little sequel slump. “Spider-Man: Far From Home” got a head start by opening on the Tuesday ahead of Independence Day, but it collected $93 million over the traditional three-day weekend. That’s a stellar start to be sure, but a notable drop from the $117 million debut of its predecessor, 2017’s “Spider-Man: Homecoming.” “Spider-Man: Far From Home” still set a number of records this week, including biggest Tuesday ticket sales of all time ($38 million), best Wednesday grosses for a Marvel movie ($27 million) and the second-largest Fourth of July holiday ($25 million). It also marks Sony Pictures’ biggest six-day opening weekend ever. Overseas, the 23rd movie in Marvel’s Cinematic Universe earned $395 million, boosting its global tally to a mighty $580 million after 10 days. “Spider-Man: Far From Home,” which carries a $160 million price tag, picks up after the events of “Avengers: Endgame” and sees Peter Parker (Holland) on a class trip to Europe. While overseas, he is reluctantly enlisted by Nick Fury (Samuel L. Jackson) and Mysterio (Jake Gyllenhaal) to help take down threats from an alternate dimension. Zendaya, Cobie Smulders, Jon Favreau and Marisa Tomei all returned for the sequel. Also opening this weekend was A24’s “Midsommar,” director Ari Aster’s sophomore feature. The folk horror film generated $6 million over the weekend and $10.9 million during its first five days of release.