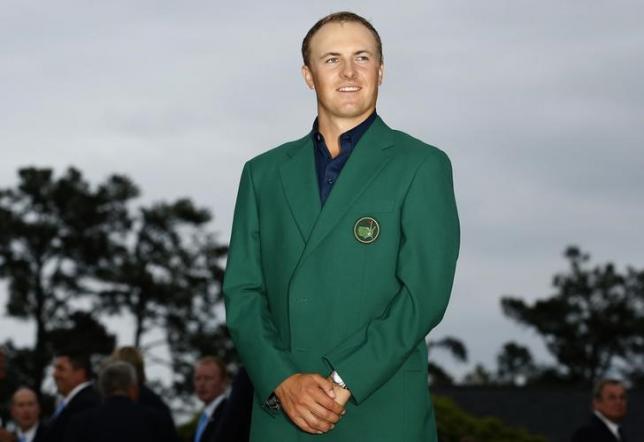 AUGUSTA, Georgia – Young gun Jordan Spieth, evoking memories of Tiger Woods at Augusta National 18 years ago, added his name to golf's record books with a stunning wire-to-wire victory by four shots at the Masters on Sunday. Ice-cool whenever he faced adversity, the 21-year-old American who is known for his brilliant putting closed with a two-under-par 70 to match Woods' tournament record low of 18-under 270 for 72 holes. Woods achieved the mark when he clinched his maiden major title at the 1997 Masters, also aged 21. "It was very nerve wracking today," Spieth, the second youngest Masters winner after Woods, said before being helped into the coveted green jacket by last year's Masters champion, American Bubba Watson. "I thought today might be a little easier than yesterday, having played with the lead, but it wasn't. I didn't sleep well last night. "It's the most incredible week of my life," added Spieth, who effectively turned the year's opening major into a one-man show when he fired a 64 in the first round. "This is as great as it gets in our sport. This is a dream come true for me." Spieth's playing partner Justin Rose of England, the 2013 U.S. Open champion, signed off with a 70 to share second place with three-times Masters winner Phil Mickelson, who carded a 69. "I was really happy with the way I felt today on the golf course, how composed I was and how in control of my emotions I was," said Rose, who birdied the first two holes to apply early pressure. "Jordan is just so comfortable with the lead. Awesome composure, every time I thought maybe there was a chink in the armour, he'd come out and hole an eight-foot putt." GRAND SLAM BID Northern Ireland's world number one Rory McIlroy, who had been on the brink of missing the cut midway through the second round, finished alone in fourth at 12 under after shooting a 66. "I played well," said McIlroy, who had been bidding for a career grand slam of the four majors. "Obviously very happy with how the weekend went.... "Jordan obviously started off fantastically well, and has just kept his foot down, really impressive. It's great for the game, and I'm sure he'll win many more (majors)." Four-times champion Woods, on his return to competition after a two-month absence to retool his game, tied for 17th at five under with a 73. Spieth, who led by four strokes overnight, never allowed his challengers to get any closer than three shots as he relied on his trusty putter and ice-cool composure to rebound from any stumble on the firming, severely contoured greens. Out in one-under 35 with a five-stroke cushion, he drained a 20-footer for birdie at the 10th to briefly forge six ahead before he faltered with a three-putt bogey at the tricky par-three 12th. Spieth carded his fifth birdie of the day at the par-five 13th and picked up another shot at the par-five 15th to keep at bay Rose, who reeled off three straight birdies from the 13th. At that point the first player ever to reach 19 under at the Masters, Spieth did well to save par at the 16th. After pushing his tee shot right at the par-four last, Spieth hit his second to just short of the green, chipped up to five feet but missed the par putt to slip back to 18 under. Japan's Hideki Matsuyama, helped by an eagle at the par-five 13th, closed with a 66 to finish fifth at 11-under 277. –Reuters