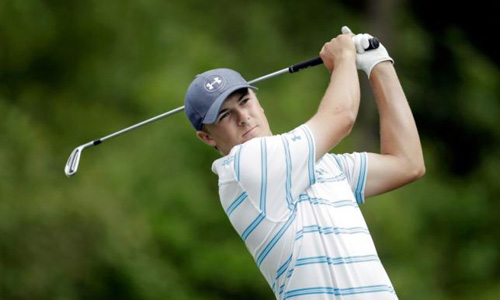 TEXAS - Texan Jordan Spieth continued his sizzling form when he surged to a one-stroke lead after the third round at the Houston Open on Saturday. Playing in front of his parents and sister, the 21-year-old compiled six birdies, punctuated by a 40-foot putt from the fringe at the 16th hole, on his way to a five-under-par 67 at the Golf Club of Houston in Humble. He posted a 14-under 202 total with one round left, while fellow Americans Austin Cook (70), Johnson Wagner (66) and Scott Piercy (66) were equal second on 13-under. Phil Mickelson (75) and halfway leader Andrew Putnam (76) plunged six shots off the pace after struggling in a north-easterly breeze that provided a stern test. World number four Spieth has been the hottest player in the world the past five months, but he was not ready to plan his victory speech. “I drove the ball extremely well today to give myself some chances coming in,” he told Golf Channel. “I’m not going to think about being up one. I’m going to think about playing the golf course. “It’s a bunched leaderboard. I’m going to have to make a lot of putts, shoot a good solid under-par round to have a chance to win.” Spieth won the Valspar Classic in Florida three weeks ago, one of three worldwide victories in his past 10 starts. Only twice in that stretch has he finished worse than seventh. Though he hails from Dallas, more than 200 miles away, a victory in front of his family in a home state event would be extra special, and provide him with an added confidence boost heading into next week’s Masters. Cook, meanwhile, displayed composure beyond his experience in only his second PGA Tour event. He temporarily took the lead before ending the day tied second. He made a double-bogey at the par-five 15th, where he took a penalty stroke after yanking his drive into a hazard, but bounced back with a birdie at the difficult 17th. Patrick Reed, who is tied for 10th at 10-under, had the shot of the day, a hole-in-one with a five-iron from 178 yards at the 16th. Reed celebrated by racing his caddie in a 75-yard sprint across a bridge to the green. - REUTERS