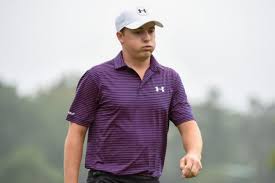 ATLANTA – Jordan Spieth, a world beater earlier this year, appeared frustrated, out of sorts and out of steam as the PGA Tour's FedExCup playoffs got underway. The Texan missed cuts at the first two events of the season-ending series - The Barclays and Deutsche Bank Championship - and when he got to the Tour Championship finale at East Lake was worried about how he was hitting and putting the ball. But after a bogey-free four-under-par 66 on Friday that vaulted him into second place, three shots behind leader Henrik Stenson of Sweden, the 22-year-old Spieth was bursting with positive energy. "It was not pretty, tee to green for me," said Spieth, who won the first two majors this year -- the Masters and U.S. Open. "But around the greens I feel comfortable on Bermuda (grass), this is exactly the stuff I grew up on. It's as comfortable as I feel all year. I love the greens here, I love the tough rough and the bunkers." Spieth especially loves sinking putts, and he began doing that on Friday, starting with a 17-foot, par-saving putt at the par-three sixth. "When I stood over the putt on six, I felt very, very comfortable, even though it was a longer par putt," he said. "I just felt a little bit better over the ball than I have recently and throughout the rest of the round it really felt that way." SHORT-GAME SKILLS Spieth needed only 23 putts and, despite hitting only nine greens in regulation, he used his short-game skills to avoid bogey. "If we can hit a few more greens and not rely on nine-for-nine, that would be fantastic," he said. "To shoot four-under hitting nine greens is another thing that I can take as a positive." Spieth followed his two major triumphs with a tie for fourth at the British Open, one shot from joining a playoff, and a runner-up finish at the PGA Championship to red-hot Jason Day. Then came a slide. "Maybe just a little bit of mental fatigue. I don't know," Spieth said. "I'm not going to throw it to that because by the time I stand on the first tee, I've got plenty of adrenaline and excitement and I love competing, so it's still there. "But I think that mistakes wear on me a little bit. They have worn on me a little quicker recently. Today it wasn't the case." A revived Spieth wants to win the Tour Championship and the $10 million FedExCup prize that would come with it. "When you know that the course is a bit harder ... it's easier to stay patient," he said. "So that's why I like playing on challenging golf courses. –Reuters