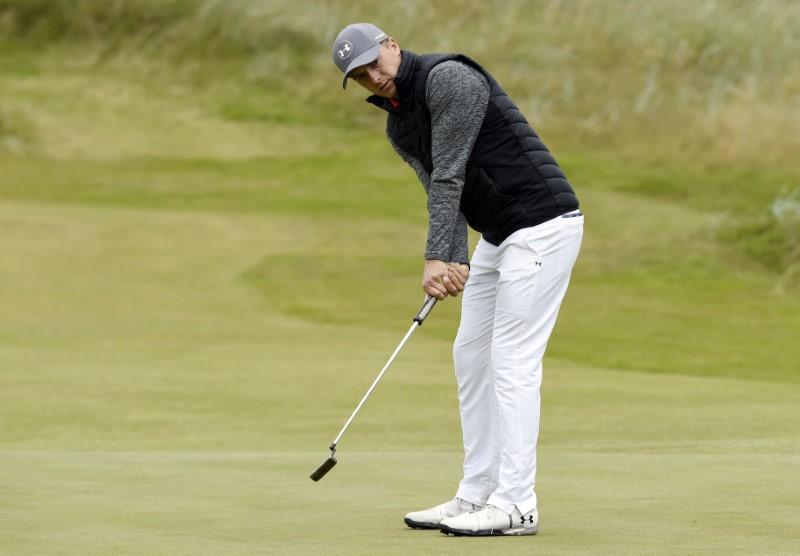 Spieth, world number three and twice major champion, putted smoothly to pick up five birdies and did not drop a shot as fierce crosswinds buffeted the early starters at Royal Birkdale.

Koepka, who won the U.S. Open last month, hit three successive birdies from the 11th hole before making his only bogey at the 16th.

He chipped in from a pot bunker for an eagle at the par-five 17th to return to the top of the leaderboard and he put his success down to a trip to Las Vegas to celebrate his first major title.

"It was fun, I had a few friends out. We had a good time," Koepka said. "Getting back to the gym was tough, but if I'm mentally recharged then so is my swing."

Kuchar moved to five under at the turn and looked poised to open up a healthy lead as conditions improved in the afternoon but he parred each hole on the back nine to stay level with his compatriots.

"I watched some of the golf this morning on TV and it looked awfully challenging," he said. "But for me to start my British Open with a 29 on the front nine is a great way to start."

The trio finished a shot ahead of England's Paul Casey and South African Charl Schwartzel.

England's Ian Poulter, runner-up in the 2008 Open on this course, Spaniard Rafael Cabrera-Bello and Americans Justin Thomas and Charley Hoffman were among a group of players a stroke further back following rounds of 67.

Defending champion Henrik Stenson of Sweden stayed in contention with a 69 while world number one Dustin Johnson of the United States and four-times major winner Rory McIlroy battled to one-over 71s.

Many players struggled to cope with the elements and the punishing bunkers.

American Phil Mickelson, 2013 Open champion, shot 73, local favourite Tommy Fleetwood, the world number 14, could only manage a scrappy 76 and Mark O'Meara endured a day to forget on his return to the course where he won the 1998 Open.

Handed the honour of hitting the first shot of the tournament, the veteran American sent his drive out of bounds before running up a quadruple-bogey eight on the way to an ugly 81.