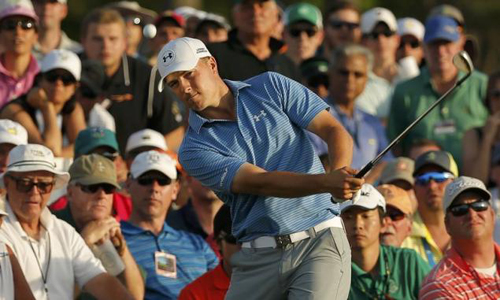 GEORGIA - The biggest names in golf put major pressure on Jordan Spieth but the young American refused to crack, carding a two-under 70 on Saturday to take a four-shot lead into the final round of the Masters. Masters champions Tiger Woods and Phil Mickelson and world number one Rory McIlroy all took turns trying to rattle the 21-year-old Texan, but Spieth held steady on a sweaty Georgia afternoon, setting a Masters record 54-hole total of 16-under 200 to better the previous mark of 201 shared by Woods and Raymond Floyd. Runnerup to Bubba Watson last year in his Masters debut, Spieth will again feature in Sunday's final pairing where he will be joined by Englishman Justin Rose, who emerged as a green jacket contender with a blazing back nine. The 2013 U.S. Open winner, 10 shots back of the leader on the front nine, collected five birdies over his final six holes for a five-under 67. Phil Mickelson also had a 67 to sit five off the pace while Charley Hoffman returned a one-under 71 to leave him six back. McIlroy and Woods were among those at six under after shooting 68s. The third round of the Masters is often filled with drama but with Woods, the 14-time major winner; Mickelson, a three-time Masters champion; and McIlroy, chasing a career grand slam, all on the charge the atmosphere around Augusta National was electric with possibilities as Spieth's composure was put to the test. Holding a five-shot overnight lead, the unflappable Spieth had threatened to run away with the year's first major, widening his lead to seven before a double-bogey at the par-four 17th. After carding just a single bogey through the opening two rounds, Spieth had three on Saturday along with his double-bogey, but also compiled seven birdies. "I knew that something under par would be a good round," Spieth told reporters. "The greens kind of baked up and got quick and slippery. "Obviously being four-under at one point in the round and closing it out at two-under is disappointing. "Obviously would have liked to have finished the round a little bit better but also could have been worse. "They are going to bring their game and I've got to have a relatively stress-free round going; and when I say that, I mean give myself some tap in pars and not have to make so many putts." Competing for the first time in two months after a self-imposed absence from the PGA Tour to retool his game, Woods flashed glimpses of the form that carried him to four green jackets as he joined McIlroy, Kevin Streelman (70), Kevin Na (70) and Dustin Johnson (73) in a tie for fifth, 10 shots back of the frontrunner. "I've got to go out early and do what I did a few years ago, I shot 30 or 31," said Woods refusing to wave the white flag on a fifth Masters title. "I'm going to have to do something like that and continue on the back nine, at least give myself a chance going in the back nine. "It's in Jordan's hands right now, he can run off and make three birdies coming in and put a substantial gap between himself and the rest of the field. "But you just never know." McIlroy made a spectacular start with an eagle on the par-five second. On the brink of missing the cut with nine holes to play on Friday, the Northern Irishman grinded his way to eight under but stumbled with bogeys at the 16th and 18th. "A disappointing finish," lamented McIlroy. "But overall felt like I played pretty well; and as I say, just a little disappointed the way I finished." - REUTERS