Spieth seeking the spirit of '14 at Australian Open 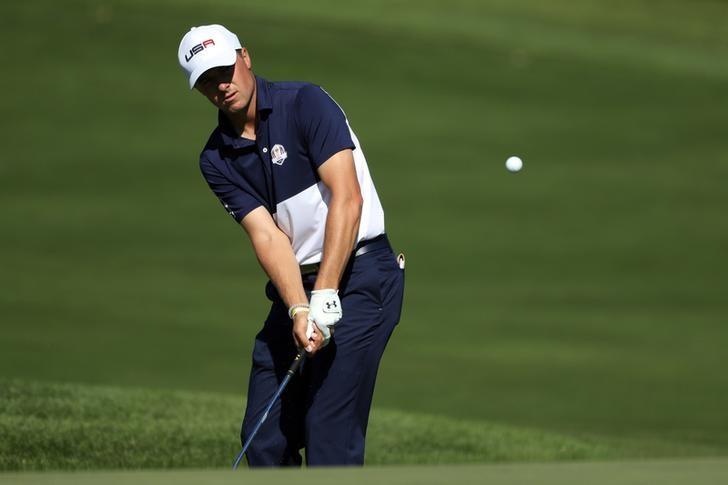 Spieth seeking the spirit of '14 at Australian Open

Former world number one Jordan Spieth is hoping a successful return to the Australian Open this week can act as a springboard for a stellar campaign next year, replicating the brilliance that followed his victory Down Under in 2014. The American, now ranked fifth in the world, will be fit and fresh when he returns to Sydney for a third straight year after enjoying a six-week layoff. The 23-year-old finished second behind Matt Jones a year ago but it was lifting the Stonehaven Cup after shooting a final-round 63 to hold off a field including Adam Scott and Rory McIlroy 12 months earlier that really stuck in his memory. "It was one of the best rounds I've ever played," he told reporters on Tuesday from the Royal Sydney venue where the tournament tees off on Thursday. "(I) had a long putt for birdie and heard a roar, from, I think, Adam making birdie on the hole in front, and I just remember that not bothering me as much as it bothered me when I was in contention (previously), feeling that extra pressure. "I learned how to really close a tournament. And then we went into (2015) and did that a few times. So, it was big. I could use another experience like that in order to gather how we felt, how we produced..." Spieth won the US Masters, the US Open, the Tour Championship and two other tournaments in 2015, making this year's two PGA Tour wins and a Ryder Cup triumph appear a fairly meagre return by comparison. "This year will go down as a really good solid year again," Spieth added. "It was just the second half that I would say I maybe tried just a bit too hard, didn't let it come to me, was getting a little frustrated with the lack of first place finishes I guess. "Even though, if you win five times a year for the amount of time I expect to be on tour, I'll have more than Tiger's, so it's unrealistic. "If we win two times for the next 20 years, that's Phil Mickelson territory and people think he's a pretty good golfer, he'll go down in history as a pretty good golfer." World number seven Scott also returns to Royal Sydney this week, looking to add a second national open title to the one he claimed in 2009. -Reuters