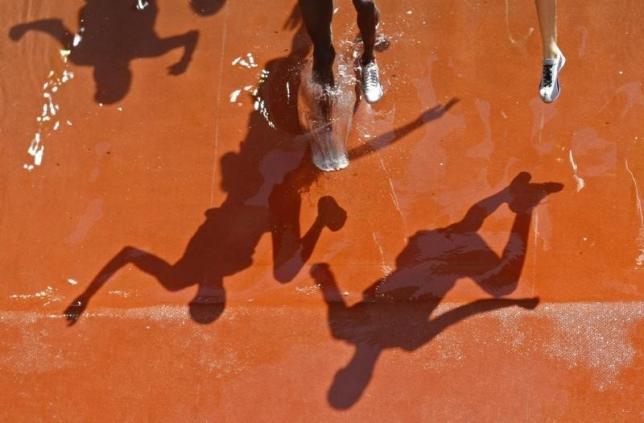 KUALA LUMPUR - The world of athletics was rocked on Sunday by "wild" doping allegations involving hundreds of suspect blood samples, just as global sports leaders were meeting in Malaysia. International Olympic Committee members and sports federation chiefs woke to the news that IAAF test data had been leaked to news organisations and that it allegedly showed suspect samples from athletes, including Olympic and world championship medallists. Britain's Sunday Times newspaper and German broadcaster ARD/WDR say they were given access to the results of over 12,000 blood tests provided by more than 5,000 athletes over 11 years in a case that could plunge athletics into a new doping crisis. The tests showed more than 800 athletes had given blood samples that were "highly suggestive" of doping or "abnormal", reported the BBC, who added they had also seen the documents. The news appeared to take the president of the athletics federation (IAAF) Lamine Diack by surprise, and he offered no immediate reaction when contacted by Reuters. The World Anti-Doping Agency said it was alarmed by the size and extent of the allegations. "These are wild allegations, wide allegations and we will check them out and have that done with the commission as quickly as possible," WADA chief Craig Reedie told reporters at the IOC Session meeting in Malaysia. An independent commission is already investigating previous allegations of mass doping. "I am very surprised by the numbers from the leak from the IAAF... I am sure they will want to look at it closely to determine the source," Reedie said. "ZERO TOLERANCE" "It was the spread of the allegations that came from previous programmes (that surprised me). If you look at allegations on blood issues... they are even wider. So that's a concern. But I stress athletes are innocent until proven guilty." Although abnormal blood tests are not in themselves proof of doping, the release of the data will be an embarrassment to the IAAF just weeks before the world championships in Beijing, where the IAAF will also elected a new president. "There will be zero tolerance, this is clear," IAAF Vice President Sergey Bubka said after meeting with WADA's Reedie and Diack, who is stepping down later this month. "The IAAF is translating the script as it is important to clearly understand the specific allegations. "We will not go into details now but the IAAF is a very strong leader in the fight against doping. We will not stop the fight. If we need to change rules and regulations we will do it." Bubka, who is vying with Briton Sebastian Coe to succeed Diack as the new boss of world athletics, said the international federation would issue a statement later commenting on the specific allegations. The IAAF introduced biological passports for athletics as part of its drug testing regime in 2009, which help in the detection of abnormal fluctuations in red blood cell counts. Athletes, most notoriously in cycling, have used blood transfusions and the stimulating agent Erythropoietin (EPO) to increase their red blood cell count, which can help improve performance in endurance events. The BBC report said a third of medals in endurance events at the Olympics and world championships between 2001 and 2012 were won by athletes who have recorded "suspicious tests". Cheating by the use of banned substances has long been a scourge of athletics, from the systematic doping in the former East Germany, through Ben Johnson's disqualification from the 1988 Olympics to the BALCO scandal in the United States. -Reuters