Spotted owl could be designated 'endangered' 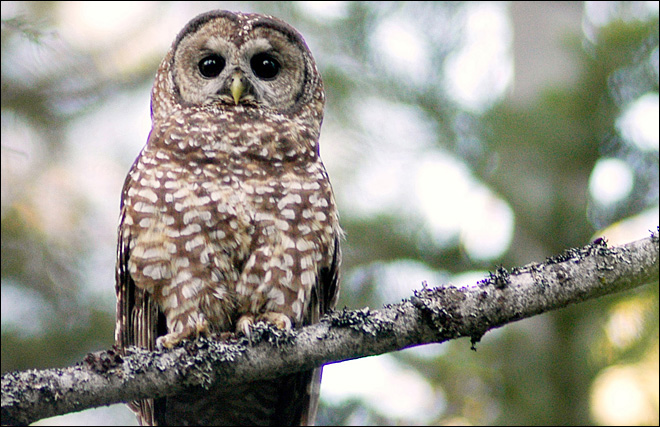 Spotted owl could be designated 'endangered'

PORTLAND - The US government said on Wednesday that it is launching a review on whether to list the northern spotted owl as an "endangered" species after a decades-old fight between conservationists and loggers. The Fish and Wildlife Service said new scientific findings by a conservation group petitioning for greater protections for the medium-sized owl warranted a review of its designation as "threatened" under the US Endangered Species Act. The spotted owl was listed as a threatened species in 1990 amid high-profile battles between the timber industry, which fought to retain the right to log centuries-old evergreen trees, and conservationists, who argued that both the bird and the ecosystem it relied on were on the brink of destruction. The population of spotted owls, which are dark brown with white spots on the head and breast, and dark brown eyes, has continued to decline at a rate of about 2.9 percent per year to an estimated population of fewer than 10,000, the Fish and Wildlife Service estimates. Conservationists put the number at fewer than 4,000. The decline comes despite logging restrictions and a plan launched by wildlife officials in 2011 to thin the population of barred owls, a rival from farther east which has encroached on its native cousins habitat in old-growth forests in the Pacific Northwest. Fish and Wildlife officials said the loss of old-growth forests was deemed the most significant threat to the owls in the 1990s, but the growing population of the larger, more aggressive barred owl is now seen as a greater threat as they disrupt spotted owls' nesting and compete for food. Spotted owl numbers have continued to fall despite protections and both threats would be analysed in the federal review. "On a positive note, the experimental removal of barred owls is showing real promise, with early reports indicating that spotted owl populations rebound when barred owl populations are reduced," Paul Henson, Oregon supervisor for the US Fish and Wildlife Service, said in a statement. "Our review of the spotted owl will tell us whether current efforts to address threats are sufficient." Being listed as "endangered" would largely be a symbolic change in terms of protection afforded to the species, the Fish and Wildlife Service said. A notice announcing the review of the spotted owl's designation, which will take many months, is scheduled to run in the Federal Register on April 10. - Reuters