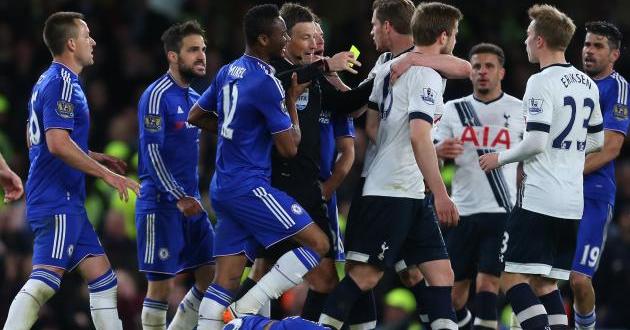 MANCHESTER (Reuters) - Chelsea know they must beat London rivals Tottenham Hotspur on Sunday to keep alive realistic hopes of qualifying for next season’s Champions League and recent history offers them encouragement. Fourth-placed Spurs are five points clear of Chelsea and with seven games to play following the London derby, an eight-point lead would require an unlikely series of results to stop Mauricio Pochettino’s side from taking the final qualifying spot for Europe’s premier club competition. Yet Tottenham’s recent record at Stamford Bridge provides hope for Antonio Conte’s side. Spurs have not won in the league at Stamford Bridge since 1990, when they had a team featuring former England players Paul Gascoigne and Gary Lineker. And Tottenham fans will need no reminding of the painful way in which their team gave up a 2-0 lead at Stamford Bridge in 2016 to draw 2-2 and hand the Premier League title to Leicester City. Eden Hazard, who scored the equaliser that day, will again be the main threat to the Spurs defence while Brazilian Willian has been in excellent form of late for Chelsea. Pochettino will again be without top scorer Harry Kane in attack as he continues his recovery from an ankle injury which has sidelined him since March 11. South Korean winger Son Heung-min has been excellent, however, as a stand-in for Kane, scoring seven goals in his last five Spurs appearances. Runaway Premier League leaders Manchester City know a victory at Goodison Park against Everton on Saturday would set up the chance to clinch the title the following week at home to their derby rivals Manchester United. Pep Guardiola’s side are 16 points clear of United but the Spanish manager will be well aware that Everton are no pushovers — he has failed to beat them in three attempts since taking charge at the Etihad. His last visit to Goodison saw City crushed 4-0 by the Toffees and while a repeat of that result is unlikely, Everton’s 1-1 draw at the Etihad in August showed they can frustrate the free-flowing football that the champions-elect have produced so often in this campaign. Jose Mourinho’s Manchester United take on relegation-scrappers Swansea City at Old Trafford on Saturday while at the London Stadium there is a real relegation ‘six pointer’ pitting West Ham United against Southampton, who will have new manager Mark Hughes on the bench for the first time in the league.