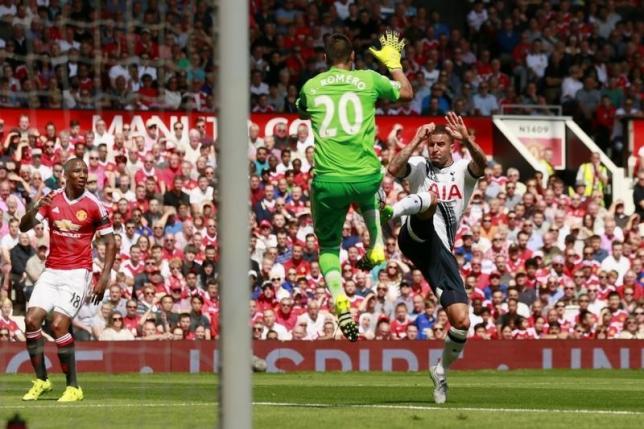 LONDON - Tottenham Hotspur's Premier League campaign got off on the wrong foot when Kyle Walker's own goal gave hosts Manchester United a 1-0 win on Saturday, but there was little in the way of doom and gloom after a spirited performance at Old Trafford. Spurs were in the ascendancy for much of the opening period and could have gone ahead in the 20th minute when Christian Eriksen was through on goal but lobbed onto the roof of goalkeeper Sergio Romero's net. That miss proved costly two minutes later when United broke down the right and when the ball fell to Wayne Rooney with the goal at his mercy Walker nipped in ahead of the United striker but succeeded only in prodding it into his own net. It was the first time a Premier League season's opening goal was an own goal. "I tried to stick my foot in the way so that (Rooney would) kick my foot instead of the ball, so it's a bit unlucky really as I'd made up a lot of ground to get there," Walker was quoted as saying by the BBC. The goal galvanized the home side, who had thrashed Spurs 3-0 in March in the corresponding fixture last season. Spurs coach Mauricio Pochettino thought his side deserved at least a point. "It was very different from last season when we didn't have a chance, but this time we deserved not only a draw but maybe even a win," he told the club's website. "For the first 20 minutes we managed the game well, we dominated and created chances. We were unlucky because we conceded a goal through our first mistake. "After that, it's true, United started to play at the same level as us but in the second half we deserved to score again. "We finished the game in a high tempo and showed we're in a good way. We need to be happy." Apart from the goal Spurs looked comfortable at the back, with new signing Toby Alderweireld impressing beside Belgian team mate Jan Vertonghen in the heart of defence, while goalkeeper Michel Vorm, starting in place of injured captain Hugo Lloris, barely had a save to make. Striker Harry Kane, who notched 31 goals in all competitions last season, had a quiet day but Dane Eriksen was a thorn in United's side all afternoon. "We created chances, especially in the first 20 minutes, and if we play like that every game we'll win a lot of matches," said Eriksen. "We're playing for points and we didn't get any today, unlucky in my opinion, but I think with the way we played especially the way we started gives us some positive things to take away with us." Spurs, who finished fifth last season, six points behind United, host Stoke in their next Premier League game on Saturday. - Reuters