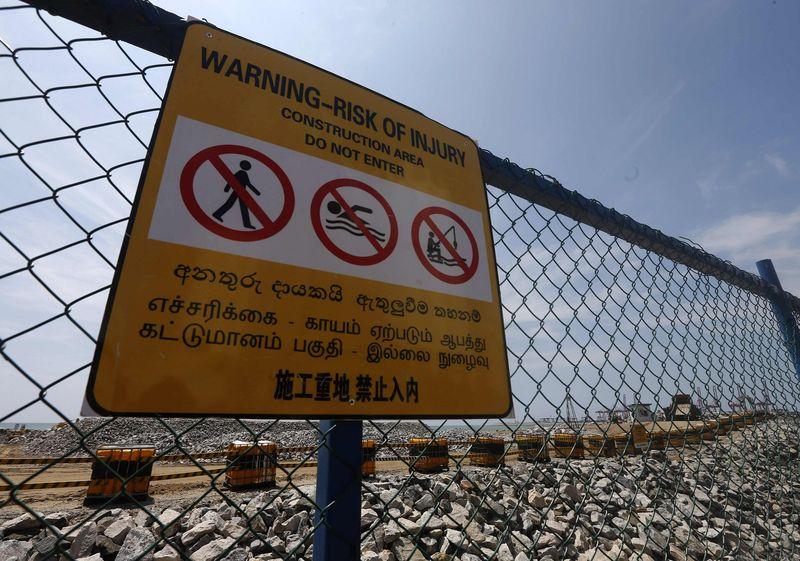 COLOMBO (Reuters) - Sri Lanka suspended a $1.5-billion Chinese luxury real estate project in Colombo on Thursday until it obtains required government approvals, a move that risks a diplomatic row with its biggest foreign investor. The new government, elected in January promising to end the corruption it said was rife in the country, decided at a cabinet meeting to suspend the project critics have called a sweetheart deal between China and the previous administration. The project, the biggest of several Chinese investments in Sri Lankan ports and infrastructure, involves a port city on reclaimed land in the capital, complete with shopping malls, a water sports area, golf course, hotels, apartments and marinas. Government spokesman Rajitha Senaratne said the China Communications Construction Co Ltd (CCCC) project had been launched "without relevant approvals from concerned institutions". The government has said the deal was not transparent and did not meet environmental standards. The project has also raised security concerns in neighbouring India, which has uneasy relations with China, because it appears to be part of a larger plan by Beijing to expand its presence and influence in the Indian Ocean region. The project was to give the Chinese firm 108 hectares of land as payment, some of it outright and the rest on a 99-year lease, and that aspect of the deal worries India because many India-bound cargoes pass through Colombo. China has said the Colombo port city and another port under development in southern Sri Lanka were good for the country as tens of thousands of jobs would be created and millions of dollars of foreign direct investment would come in. Earlier on Thursday, before the cabinet decision, the Chinese Foreign Ministry said it hoped Colombo would resolve the project issue in a way that maintains the confidence of Chinese firms investing in Sri Lanka. China has emerged as a major investor in the Indian Ocean island state, focusing on building ports and highways. Sri Lanka has threatened legal action against the Chinese firm if it went ahead with work on the port project.