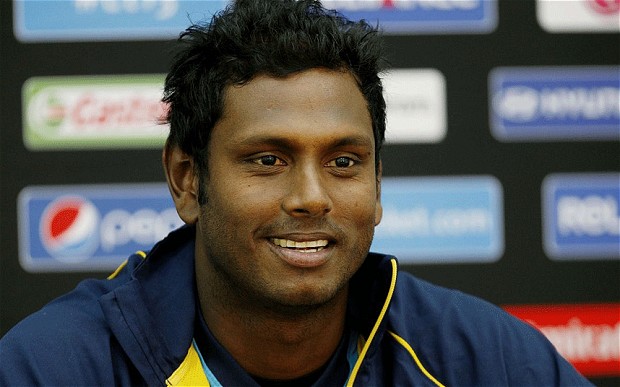 MELBOURNE (Reuters) - Out-of-form Sri Lanka must play every pool game at the World Cup as if it were a knock-out match to ignite their stuttering campaign, captain Angelo Mathews said on Wednesday. Runners-up at the last two tournaments, the Sri Lankans were thrashed in their opening match against New Zealand and then had to rely on a match-saving ton from retiring stalwart Mahela Jayawardene to survive a huge scare against minnows Afghanistan. Adding to their troubles, Sri Lanka head into Thursday's match against Bangladesh without all-rounder Jeevan Mendis, who will play no further role in the tournament after suffering a hamstring injury. With most of his team mates misfiring and home media predicting an early exit, Mathews was feeling the pressure ahead of the danger game at the Melbourne Cricket Ground. "It's certainly going to be a tough game," the all-rounder told reporters on Wednesday. "Bangladesh have performed really well in the recent past. "It's a World Cup game. It's going to be a pressure game for all of us. So, as I keep saying, we can't take any team lightly. "We've got to set our standards and set our goals high and play every single game as a final or semi-final." Three of Sri Lanka's top order batsmen have scored ducks in the first two matches, putting pressure on a bowling attack which has also been let down by some sloppy fielding. Undermanned, Sri Lanka will have to lean heavily on flamboyant fast bowler Lasith Malinga, who took three wickets in an encouraging display against Afghanistan after being torched by New Zealand's batsmen on his comeback game from ankle surgery. Mathews said there was no chance of big strategic changes to revive Sri Lanka and his players would have to make it happen on the pitch. "When you're in the World Cup, you can't go into too much technical side," he said. "But I think you've just got to give them confidence. "Like Lasith is back after injuries and bowling after a few months. I'm sure he's working extremely hard at the net to get everything right. "So at the back end of the series when it comes to the quarter-finals, that is the time you've got to be at your peak. "But if we click as a group, I think we can do wonders. It's just we need to click as a group and try to win games."