COLOMBO (92 News) - Skipper Dimuth Karunaratne’s ninth Test hundred underpinned the highest successful chase ever at the Galle International Stadium, as Sri Lanka ushered into the World Test Championship era with a six-wicket win over New Zealand in the first Test.

Never before had a team successfully chased a three-figure score at the old Lankan fortress. But on Sunday, 18 August, Sri Lanka rewrote the record books by running down 268 with six wickets in hand, thanks to Karunaratne’s brilliant 122 at the top of the order. The win also gave Sri Lanka 60 points on the Test Championship table, taking them above Australia, whose 251-run win over England in the Ashes opener at Edgbaston, had given them 24 points. On a surface that did not deteriorate as drastically as Galle surfaces are known to, New Zealand’s bowlers struggled to make breakthroughs, picking up just four wickets after 86 fourth-innings overs.

Each of Trent Boult, Tim Southee, William Somerville and Ajaz Patel, who had snared a five-wicket haul in the first innings, picked up a wicket each. But, crucially, they conceded 214 runs between them. Or, in other words, close to 80% of the required runs. But this was a story about Karunaratne and Sri Lanka. Before Sunday, the home team captain had batted 24 times in the fourth innings of a Test match and had never once scaled down the three-figure mark, the closest he had to come to doing so being 97. But on Sunday, he clinically led Sri Lanka towards victory. The process began early, as Karunaratne stitched together 161 runs with Lahiru Thirimanne for the first wicket to effectively ensure that New Zealand were always playing catch up.

Nearly half the target had been shaved off on the fourth evening, when Sri Lanka went into stumps on 133/0. Which meant that all they needed to do was avoid losing early wickets and start steadily on the fifth morning. They would have failed in that bid had Tom Latham not dropped a tough chance at short leg in the sixth over of the morning, when Karunaratne attempted to flick Patel and offered a low chance to the close-in fielder. He was on 78 then. A four and a six off the captain’s bat in back-to-back overs was an indication that there were no demons on this pitch and that batting would be a far easier pursuit than it typically is on a day-five Galle surface. 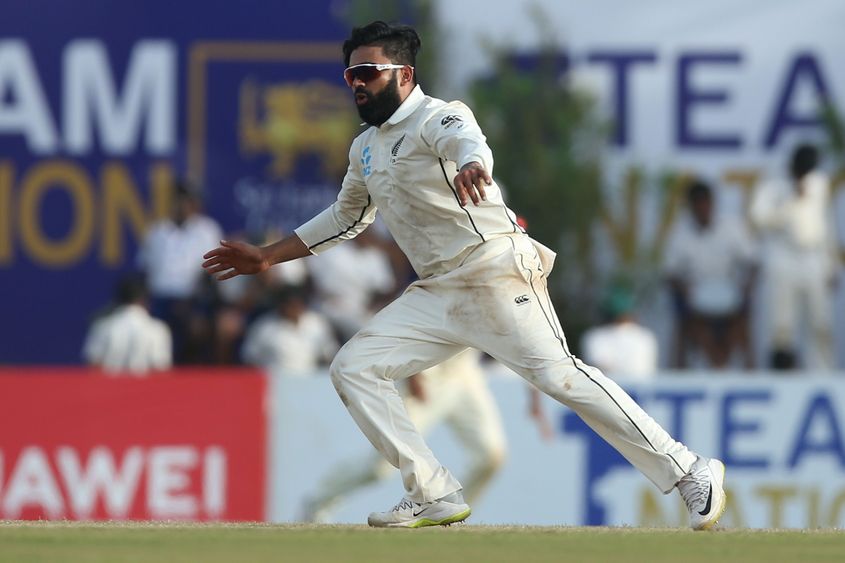 Ajaz Patel could not replicate his first-innings heroics
New Zealand had to wait ten overs into the morning for the breakthrough to arrive. Thirimanne ventured a lavish sweep and was pinned in front of leg stump by Somerville. But all it took were four balls to offset the damage and turn the heat back on New Zealand, as new man Kusal Mendis slapped a four and a six in his first four balls after arriving. Mendis’ hurried and chancy stay – he had offered a chance that flew past short leg first ball – came to an end in the next over, when he tried to sweep Patel and picked out Jeet Raval at mid-wicket. Karunaratne had, meanwhile, quietly moved on to 99. He used his feet to take on Patel and loft him through the cow corner region to raise the hundred, which was met with a hearty round of applause.

Sri Lanka’s 200 arrived three overs later as the game began to rapidly slip out of New Zealand’s hands. Karunaratne finally perished in the 77th over, nicking off to the ‘keeper BJ Watling after attempting a loose drive against Tim Southee. But by then, the damage had already been inflicted on the visiting team. A late wicket of Kusal Perera, with Sri Lanka 18 runs away from the target, hardly deterred the home team, as they sealed the chase inside an extended first session that lasted 36.1 overs.