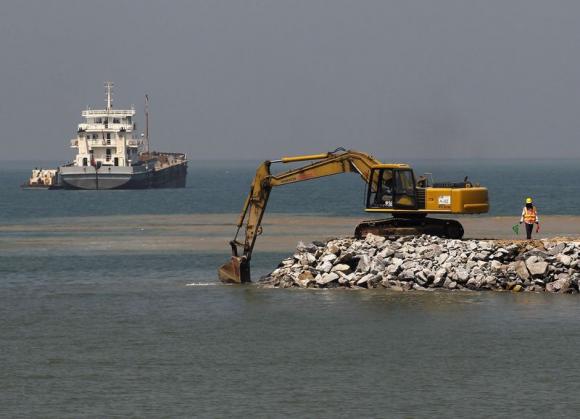 COLOMBO (Reuters) - Sri Lanka will take legal action against a Chinese firm for not halting work on a $1.5-billion luxury real estate project until a probe is completed, a government minister said on Wednesday. Sri Lanka's new government is reviewing the award of the project to China Communications Construction Co Ltd (CCCC) over allegations the previous administration breached laws and sidestepped environmental rules for the deal. The project, which risks getting involved in a diplomatic row, involves development of a port city on reclaimed land in the capital Colombo, complete with shopping malls, a water sports area, golf course, hotels, apartments and marinas. Sri Lanka's Investment Promotion Minister Kabeer Hashim said the Board of Investment (BOI) had last month asked the Chinese firm to halt the project until the investigation was completed. However, the port city construction had actually been accelerated since the new government came in. "Rightfully, they should stop," Hashim said. "The ministry of ports will take necessary action to halt the work until this inquiry is done." If it was not stopped, he said, "Then legal action will be instituted against them to not proceed any further." An official in CCCC's investor relations department said the firm was not aware of the minister's latest remarks. "The government has made some suggestions during its review but there has been no mention of cancelling the project," said the Beijing-based official, who declined to be identified, citing company policy. China has said the port city and another port under development in southern Sri Lanka were good for the country and that tens of thousands of jobs would be created and millions of dollars of foreign direct investment would come. China has emerged as a major investor in the Indian Ocean island state, building ports and highways in a diplomatic push that has drawn concern in neighbouring India, which has uneasy relations with Beijing.