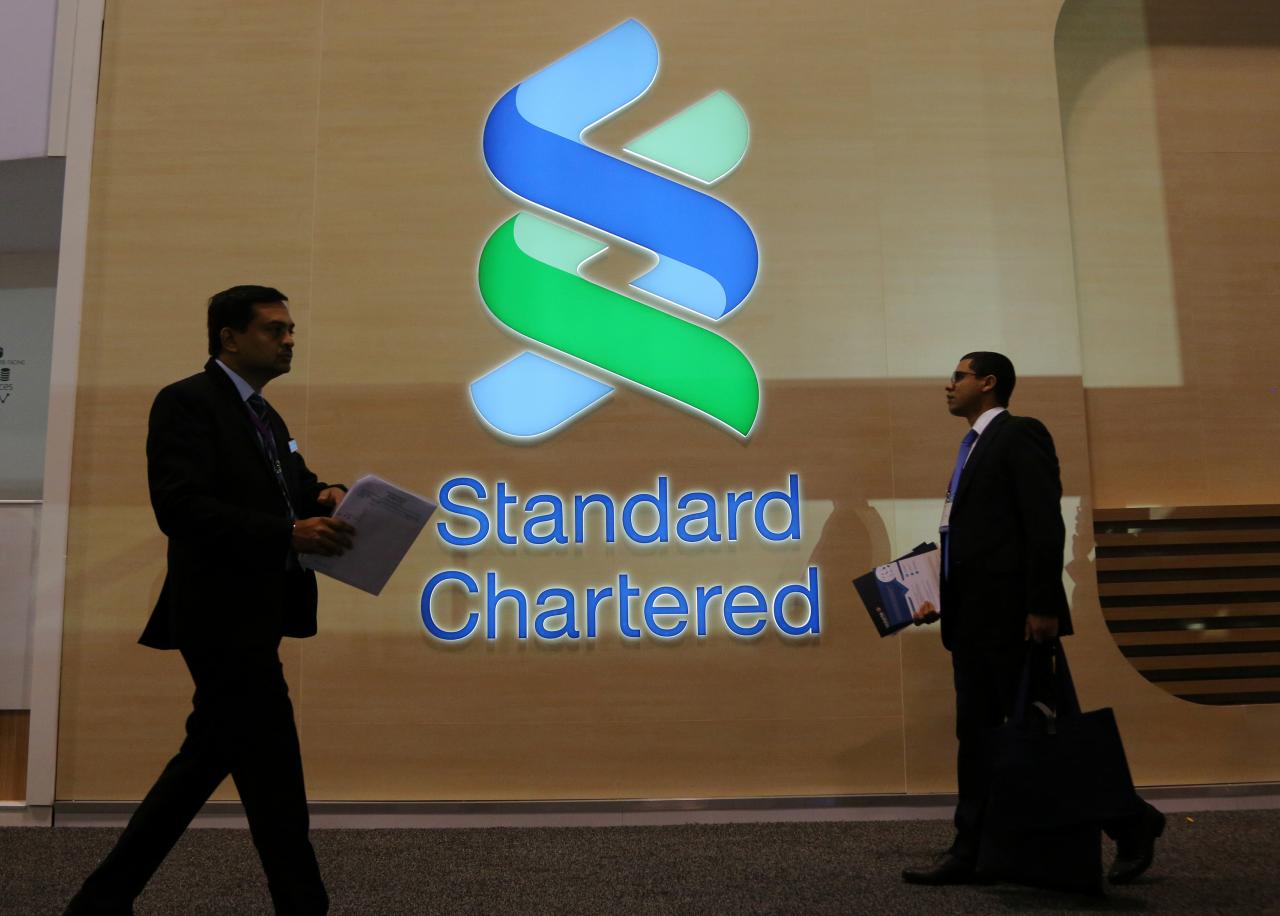 HONG KONG/LONDON (Reuters) - Standard Chartered (STAN.L) warned on Wednesday an escalating Sino-US trade war was weighing on business sentiment in its core emerging markets, after posting a better than expected 31 percent rise in quarterly profit before tax.
The downbeat comments on global trade reflect a more pessimistic tone than the Asia-focused lender’s statement in July where CEO Bill Winters said he saw a “minimal” hit to the bank’s performance from the US-China spat. The British lender is particularly sensitive to trade tensions, since it has during its 150-year history focussed on financing trade between Asia, Africa and other parts of the world. Greater China and the rest of North Asia account for 40 percent of its operating income. “Escalating trade tension and other macroeconomic factors are affecting sentiment in emerging markets,” StanChart said in its earnings statement, in one of the grimmest predictions on the issue so far by a global bank. The world’s top two economies are already waging a tariff war over their trade disputes, with US duties in place on $250 billion worth of Chinese goods and Chinese duties on $110 billion of US goods. StanChart posted a profit before tax of $1.1 billion in the three months ended Sept 30, above the $814 million profit in the same period a year ago and higher than the $978 million average of analysts’ forecasts. Hong Kong shares of StanChart (2888.HK) rose as much as 2.7 percent after the earnings announcement but later gave up a chunk of the gains to be up 0.7 percent at 0614 GMT, in line with the broader market .HSI. StanChart said the trade tensions particularly impacted its wealth management business, as falling stock prices as a result of the economic uncertainty made retail customers more reluctant to invest. Wealth management income in the quarter dropped 4.7 percent from a year-ago period to $465 million. StanChart’s results come after bigger British rival HSBC (HSBA.L) earlier this week posted a surprise 28 percent rise in third quarter earnings as it tightened its grip on costs. HSBC had said the impact of the trade spat was “not yet manifesting itself in business activities in a meaningful way”.

StanChart reported operating expenses of $2.51 billion for the third quarter, roughly in-line with analysts’ average forecast of $2.55 billion, but 1.2 percent higher than the year-earlier period, it said in the earnings statement. The bank’s total operating income during the quarter rose 3.8 percent from the year-ago period, but fell 1.4 percent from the preceding three months. StanChart said that income growth was impacted by sluggish business in Africa and the Middle East. “Macroeconomic and geopolitical headwinds” continued to impact performance in the quarter particularly in the United Arab Emirates, the bank said. “But growth fundamentals remain solid across our markets and we are cautiously optimistic on global economic growth,” CEO Winters said. StanChart has struggled in recent years to grow income, after Winters in 2015 embarked on a sweeping restructuring aimed at weeding out a persistent bad loan problem and improving senior bankers’ accountability. The bank has since poured money into its retail banking business and wealth management technology platform, but has yet to see that translate into significant increases in profit. StanChart said in the statement it would set out a refreshed strategy when it reports full-year results in February, as it seeks to further improve returns. Chief Financial Officer Andy Halford earlier this month warned staff in an internal email seen by Reuters that it faces a “significant challenge” to meet its 2018 cost reduction targets. The message said the bank had made ‘virtually no progress’ in meeting cost targets and urged senior managers to consider cutting jobs, paring back travel expenses and freezing new hiring. The leaked internal email said managers could consider cutting investment plans, which Winters has hailed as the solution for the bank hitting its modest near-term return on equity target of 8 percent.