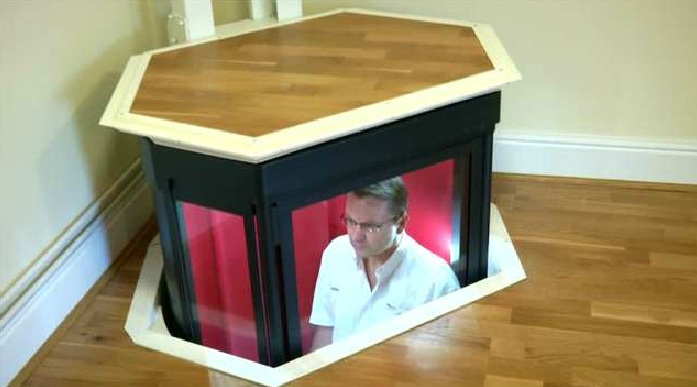 LONDON - For people living in a house with more than one storey, stairlifts or home elevators are often a necessity of life as they get older and find it harder to get up and down the stairs. Normal stairlifts have the disadvantage of being a permanent and visible addition to a staircase, while traditional home elevators are bulky and often impractical for most homes. A company in England is hoping their novel design will fill the gap in the market for a new kind of home elevator. Terry Lifts, based in Cheshire, have built a futuristic-looking elevator that can fit into the corner of a room and ascends through a hole in the ceiling with no lift shaft required. "You could describe it as a high-end chair lift. People don't want, in many cases, a chair-lift on their beautiful staircase and they don't necessarily want a lift; it's about looking at the lift for the long-term future proofing the property. And unlike a stairlift which is a permanent feature on your staircase, the lift can be sent away when you don't need it - so it's never the elephant in the room," said John McSweeney from Terry Lifts told Reuters. Sally and Behram from Hertfordshire, north of London, were already in the process of packing up and moving from their two-storey house after Sally's knee problems made using the stairs difficult; especially when trying to carry items up to the top floor. They had considered a stairlift but that option proved impossible for their home. "We've lived in this house for 40 years and I have problems with my knees and muscles, and the stairs in this house are very, very step and very narrow. So we needed to find either a bungalow or some means of getting me upstairs," said Sally. It wasn't until they visited a new homes exhibition while in the process of looking for a new place to live that they came across the Terry Lifestyle Lift. The couple said they realized almost instantly that it was the answer to their problems. Terry Lifts says a complete installation will take 4 to 5 days, including all building and electrical preparation work. And while the elevator doesn't come cheaply, for Sally and Behram it's allowed them to remain in their home indefinitely. "We can stay here now for the foreseeable future," said Sally. "It's just given us the old life back that we had before as opposed to moving in to something smaller which might not have met our needs quite so well." The Lifestyle Lift has a battery backup that will steadily return the user to the ground floor if there is a power cut. It also has an EU standard 30-minute fire protection feature between the floors, whether the elevator is parked upstairs or downstairs. Its pressure sensitive bottom panel and safety edges gently stop the lift if an obstruction is detected either above or below. "If a pet or child was playing underneath the lift, you've got a safety bottom with micro-switches all over that safety bottom. So as soon as it comes in contact with any obstruction, it will immediately stop. And you have about 20 millimeters of pinch-point - so there's no mild crushing at all, it is very, very sensitive," said McSweeney while he demonstrated the safety feature by placing his foot under the descending lift. Terry Lifts says it's their unique design coupled with industry-leading safety certification that is generating a lot of world-wide interest in the product. However, one unexpected response to the Lifestyle Lift has been the comparison to the pod-like elevators featured in the Star Trek TV series. "A lot of people that have come round to various exhibitions that we've been at in the UK, quite often they would say it looks more like a shower cubicle. That is the first reaction. The second reaction is the pod's design does look like the, you know, "Beam me up, Scotty" - Star Trek - you know you go in, there's two people at a time maximum, usually one, and then off it disappears," McSweeney said. And the science-fiction comparisons haven't ended there: "Well, all the neighbors think it looks like a TARDIS," said Behram, referring to the time-traveling craft from Doctor Who. Sally added that the elevator can be banished from a room when the extra space is needed. "We love it. The fact that it disappears upstairs; if we have a family gathering we extend this table and take up all the space, and it's out of the way. At night-time it comes down and it's out of the bedroom," she said. The company has exported at least 200 lifts from the UK to countries including France, China and Australia. - REUTERS