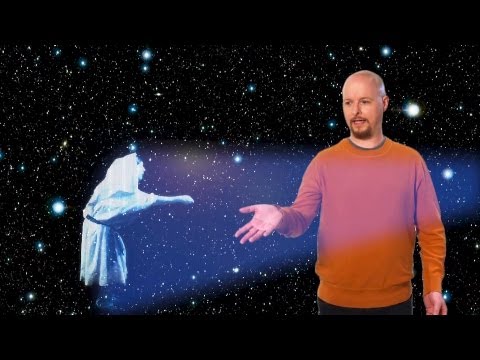 BARCELONA (Reuters) - A new 3D technology aims to give mobile devices the power to display holographic images and video. Partly inspired by a scene from Star Wars where a holographic image of Princess Leia pleads for help from Obi-Wan Kenobi, the appropriately named 'Leia' recently demonstrated a prototype of its display at the Mobile World Congress in Barcelona. A 3D projection like the one featured in Star Wars may be a step too far at the moment. But, unlike conventional 3D movies that can only be seen from one angle, Leia's designers say it offers a real sense of depth and can be viewed from 64 different angles - all without the need for 3D glasses. Leia CEO David Fattal says their technology is a first for mobile displays: "It's a display that is able to project 64 different images, going in different directions of space. So that when you look at it, your left eye and your right eye will actually see a different image and you will see in 3D. And not only that, but when you move your head around the display - you can rotate or tilt or shift the display - your eyes will see a different pair every time and you will get the sense of parallax, which means you will be able to see around objects as well." Fattal hit upon the idea for the holographic display while he was a researcher at HP Labs. His work with optical interconnects, which let computers exchange information encoded in light, led him to realize the same principle could be used to display holographic images. Structures called diffraction gratings normally send light rays through cables to transmit data, but Fattal engineered the gratings to transmit light in prescribed directions in space. The makers also developed a way to make the holograms come out of a conventional LCD screen, by simply incorporating their own technology. Conventional LCDs have a component called a backlight, consisting of a light source and a plastic light-guiding panel that directions the light toward the display's pixels. Leia essentially replaces the standard light guide with their own more sophisticated panel. "It's a very simple LCD technology, which is the technology that equips most of the cell phones and most of the regular displays today. As we essentially change just one small chief component which is called the backlight and we introduce our nano technology on to it. It sounds very scary but actually it's very benign and cheap to do. And out of this we're able to send rays of light into space instead of disorganized light that would propagate in all directions," said Fattal. Fattal says their technology could be easily integrated with existing displays: "Anywhere you have a display you would be able to replace the display and augment it with this 3D imagery. So, for example, you start with a smart watch or eventually a smart phone or a tablet. But you could have (it) in any appliance; you could have a display on a fridge or any appliance at home, a remote control or your garage opener. You could have something in a car, for example, it might be a key fob or it might be a GPS display in a car where you would see, for example, building coming out slightly in 3D, like a Google map application." To demonstrate how the technology could be applied to real-time video chat, the team arranged 64 cameras to produce a holographic image of a volunteer at the Mobile World Congress. Although it required a bulky camera array, Fattal says it could eventually be miniaturized. Later this year the company plans to release a small display module that can produce full-color 3D images and videos. It was the switch from a black-and-white to color display that proved most difficult for the developers, Fattal said. "Probably the hardest part was to move from monochrome to color. The physics that this display is based on is called diffraction. Diffraction is basically a technology that behaves very differently with different colors of light. So if you don't pay attention the red, green and blue component of your image should go in very different directions. And our core technology and our core invention was how to make these three colors work together to produce, for example, a white image that you saw or a full color image."