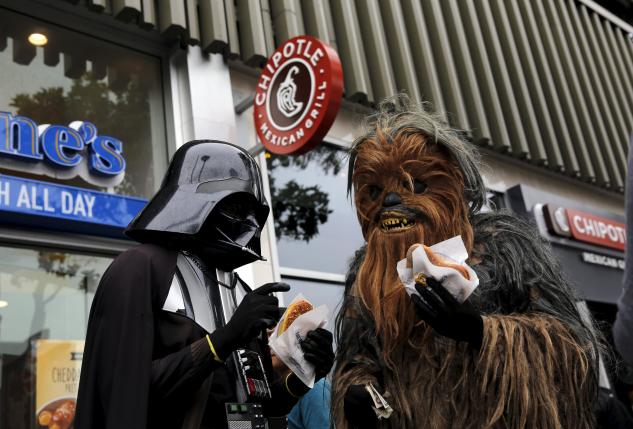 ANAHEIM - "Star Wars" is being transported from a galaxy far, far away to California and Florida after Walt Disney Co announced plans for two theme park expansions that will bring the celebrated film franchise to life. The 14-acre (6-hectare) "Star Wars" lands at Anaheim, California's Disneyland and Orlando, Florida's Walt Disney World will introduce a new planet from the intergalactic film saga, the company said on Saturday, commenting on one of Disney's largest park expansions. The project will feature two new rides, including one where participants take control of the Millennium Falcon spaceship, as well as the Cantina, the infamous hub of rogue smugglers and traders in the films. Construction will begin at Disneyland in 2017, while a start date for Disney World is not set. Disney announced several other park upgrades at its annual D23 Expo, a fan convention. They include an 11-acre (4.5-hectare) "Toy Story" land at Disney's Hollywood Studios in Florida. Disney did not comment on costs. The company spent $1 billion to build a 12-acre (5-hectare) Cars Land that debuted at Disney's California Adventure park in 2012. It will open a $5.5 billion theme park in Shanghai next year. The announcement of "Star Wars" lands, made by Disney Chief Executive Officer Bob Iger, comes as fans gear up for the December release of "The Force Awakens," the opening film in a new "Star Wars" trilogy. The first "Star Wars" movie was released in 1977 and became embedded in pop culture. Harrison Ford, who reprises the role of Han Solo, received a standing ovation at the fan convention and led the cast of the new film, including Oscar-winner Lupita Nyong'o and British newcomer John Boyega. "It's a great thing to be here with you, who made this whole thing happen. I couldn't be happier," Ford told about 7,500 fans. Disney also showcased star talent to build buzz for other films. Johnny Depp swaggered through the hall dressed as his "Pirates of the Caribbean" character Captain Jack Sparrow, as fans were told that Orlando Bloom's character, Will Turner, will return for 2017's fifth installment of the franchise, "Dead Men Tell No Tales." Nyong'o was joined by actor Ben Kingsley, newcomer Neel Sethi and director Jon Favreau for the upcoming computer-generated and live-action retelling of "The Jungle Book." Early footage showed scenery of Mowgli's jungle and Baloo the bear, voiced by Bill Murray, singing the movie's "Bare Necessities." -Reuters