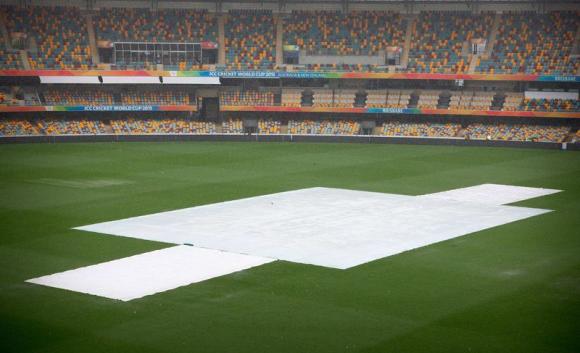 BRISBANE (Reuters) - Australia captain Michael Clarke will have to wait another week before he can join the World Cup party after steady rain washed out the hosts' Pool A match against Bangladesh at the Gabba on Saturday. Cylone Marcia brought torrential rain to the Brisbane area, where locals have been advised to stock up on supplies, and the persistent downpour snuffed out any hope of even playing a minimum requirement 20-overs-a-side contest. "AUSvBAN is officially abandoned with incessant rain making any play impossible," the International Cricket Council (ICC) said on its Twitter feed. The teams were awarded a point each, something Bangladesh, who thumped Afghanistan in their tournament opener but were huge underdogs against the hosts, will welcome more than Australia. However, nobody would have been be wanting the match to go ahead more than Clarke, who missed Australia's 111-run drubbing of England last weekend and has only played a warm-up against the UAE since sustaining a hamstring injury last December. The Bangladesh fixture was the deadline issued by selectors for the batsman to prove his fitness and Clarke told the pre-match news conference he was raring to go. "I'll put a lot of faith in my preparation and the work that I've done over the last eight-and-a-half weeks and I'm really confident that I'm a hundred percent fit to walk out on that field and help the team have success," he said. Clarke will now hope to play his first match of the tournament against co-hosts New Zealand in Auckland next Saturday.